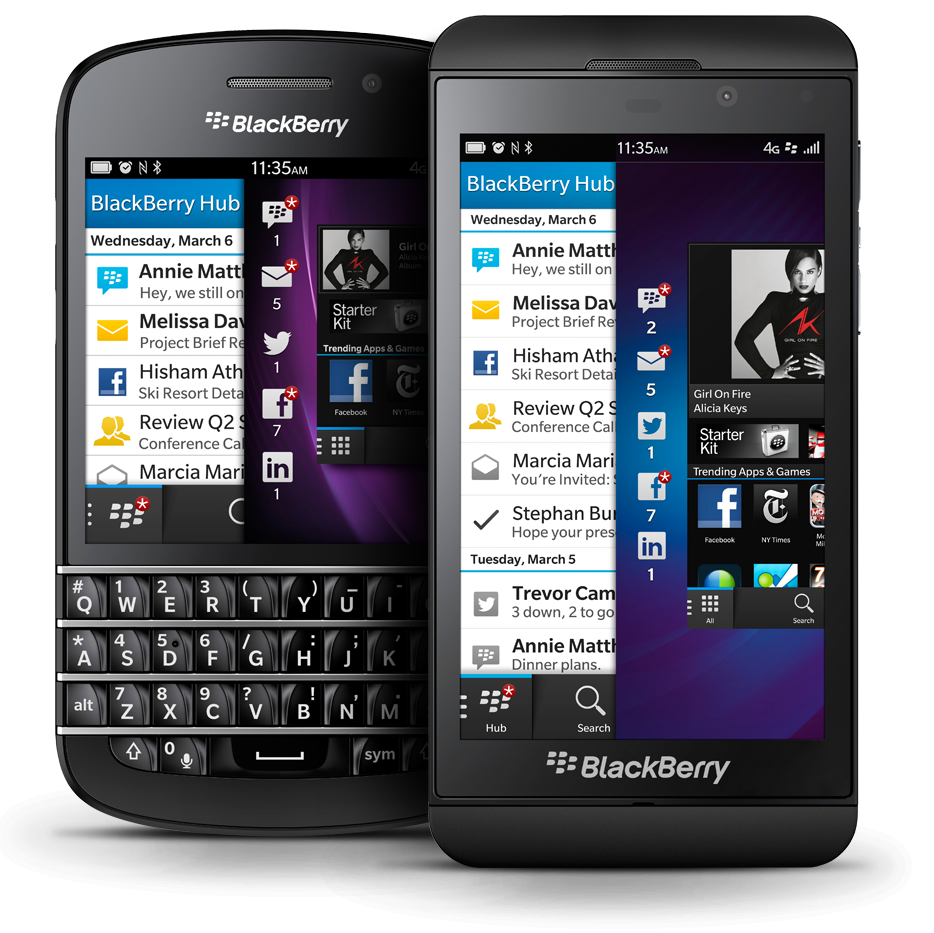 BlackBerry 10 is a brand new QNX-powered operating system built following on the PlayBook OS. (Note that the BlackBerry PlayBook will be receiving an update to BlackBerry 10 eventually.) The BlackBerry Z10 is the first device that launched with BlackBerry 10 loaded, and the BlackBerry Q10 was the second. Though the primary focus on communication hasn’t changed in the experience, the user interface moved from one that relies on physical buttons to gestures. The most important one is the quarter-turn swipe from the bottom frame to the right frame to access the Hub. This is where notifications from all sources are unified in one place where users can interact with them. Swiping up from the bottom returns users to the Active Frame screen, where a minimized version of all running applications are visible, while menus can be opened by swiping from the top pane or long-pressing on individual items for context-sensitive actions.

The virtual keyboard for BlackBerry 10 has a prediction engine powered by SwiftKey which makes suggestions based on personalized usage on a per-app basis. Suggested words appear above the next letter on the keyboard, and are picked by swiping up from that key. The camera software includes a new TimeShift function which shot a fast burst of photos, and allows users to selectively edit individual faces to different shots taken in that burst to effectively create a moment that never really existed.

How to sync Google Contacts accounts on BlackBerry 10

One problem that has come up consistently on BlackBerry 10 is getting Google contacts accounts to sync correctly. Here's how to quickly get it all working again for you!

There is life after death of Blackberry ID auth Servers?

Hello Crackberry friends.I was thinking that in a few months the authentication servers of BBID will no longer be available. I understand that if we are currently using a BB10 device it should not...

BlackBerry ID login issues for BlackBerry 10 users have been resolved

If you're in the process of setting up a BlackBerry 10 device right now, you might want to hold off for a bit as it seems BlackBerry ID is currently having some login issues.

Give your BlackBerry KEY2 and KEY2 LE that old-school feel

Hankering for a KEY2 running BB10 OS? Too bad, it's never gonna happen. Here's the next best thing.

Number of BB10 and BBOS devices still in use

Could you, please, refer to the instructions on how to survive after Doomsday?

Box for BlackBerry 10 will stop working on November 12

Facebook has been sharing user data with 60 smartphone OEMs

John Chen wants someone to build a simple, Bold 9900-like smartphone

BlackBerry CEO John Chen recently joined the Recode Decode podcast hosted by Kara Swisher for an interview, and during the discussion, he revealed that he would like to see someone, but not him, build a simple yet focused reimagining of the Bold 9900

CrackBerry Poll: Do you play games on your BlackBerry?

When it comes being able to play the latest and greatest mobile games, BlackBerry certainly doesn't have a great track record. With BlackBerry now on Android, though, I personally find myself trying out and playing more games than before.

Hey BlackBerry, can we get Story Maker for Android?

I've tried a lot Android video editing apps, none are as nice and simple as Story Maker. Hey BlackBerry, can we get Story Maker for Android?

It would be interesting to build dosbox for example, or qemu. Both of them can use SDL, but no idea if it is possible to spawn GUI from command line.

Since February, there have been new builds of BlackBerry 10 appearing on BlackBerry servers and now finally, one of them has managed to get released. Files for OS 10.3.3.3216 have now been posted in the CrackBerry Forums.

With BBID's no longer able to be moved between the BlackBerry 10 and Android and iOS and back again, a workaround solution for contacts had to be created and is now appearing in the latest BBM beta along with a few other changes.

Have you updated the google play service to latest version. Since more apps rely on latest play services. Need to download latest gms. How can we do this?