OEM Cases and Skins for the BlackBerry Pearl 3G are Looking Good! 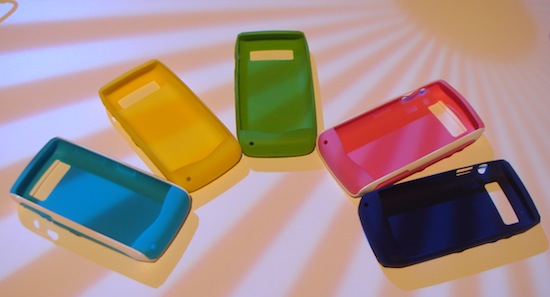 With the BlackBerry Pearl 3G, RIM is really doing everything they can on their end to make it a hit in the consumer market: they're making it available to carriers in a bunch of colors; they're offering two keyboard configurations to appeal to different markets and first time smartphone owners and they're really upping the game in terms of OEM accessories, with some awesome BlackBerry Pearl 3G cases and skins to be available.

At WES 2010 we snapped some photos of all the new BlackBerry Pearl 3G cases and skins they had on display. They have basic skins (with texture), leather pocket and side pouches (with a built-in mirror) and my personal favorite are the new cases that mix a rubber skin with a hard plastic design. These two-tone/two-texture skin cases look absolutely awesome on the new Pearl 3G and should offer a decent amount of protection while feeling good in the hand. The white/green and white/orange combo on a white Pearl 3G is my favorite. Lots more photos below. Check them out and leave a comment letting us know what you like the look of best. And if you're picking up a new Pearl when it comes out, keep your eyes on our ShopCrackBerry store - we'll be carrying a ton of BlackBerry Pearl 3G accessories.

BlackBerry Pearl 3Gs in their naked form... still hawt, but these babies are begging for skins!
They say it's for science