Double tap this photo if you think I'm a jerk (but secretly still 🖤 me) for posting a photo of THREE BlackBerry #KEYone Black Editions because you want one right now but need to wait a little longer! 😂 #hoardingphones #blackberry #10yearsofcrackberry #android #IFA2017

For those of you jonesing for the newly-announced black version of the BlackBerry KEYone, I don't blame you. It's one hot... err.. dark looking phone. You really can't go wrong with the KEYone in either color - my informal polling so far has shown about a 50/50 split on the debate of which of the two color schemes looks best. That said, when it comes to the black KEYone, there's more than just a color decision to be aware of but a specs and price one as well. And, to add a little extra confusion to the mix, the black version of the KEYone itself comes in three different varieties depending on where in the world you live. Let's clean up the confusion! 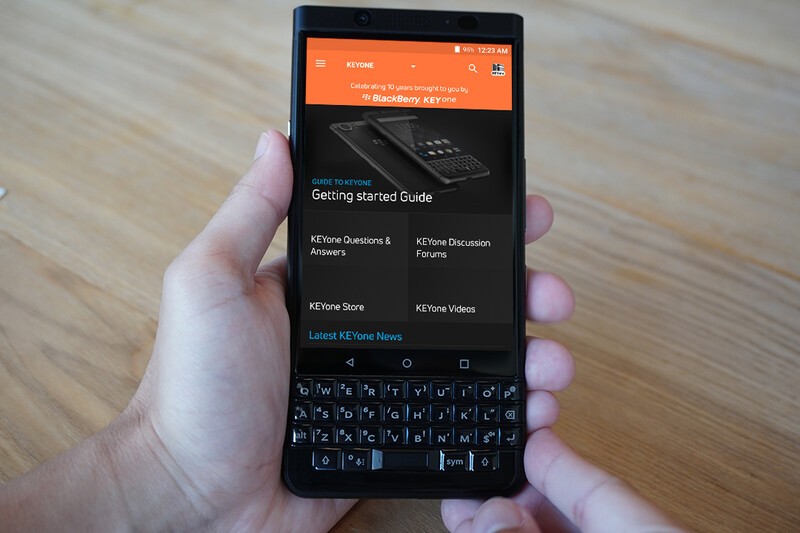 We'll get to the black Black KEYone's in a second, but first, we need to recap where the original KEYone is at for this discussion.

Original "Silver Edition" BlackBerry KEYone - 3GB of RAM, 32GB of Storage, $549USD outright/unlocked pricing. There are regional variations of this phone supporting different carrier bands and versions of the keyboard the phone ships with, when it comes to the name and RAM and Storage, it's all the same.

Now, when it comes to the black KEYone, there are three (well, more like four, I'll get to that) ways that the KEYone is being referenced:

1. BlackBerry KEYone Black Edition - You can think of this effectively as BlackBerry Mobile's default worldwide edition of this phone. Compared to the original BlackBerry KEYone, it ships with 4GB of RAM and 64GB of Storage. There's no US pricing for this phone just yet (will get to that shortly), but based on the Canadian pricing it looks like these bumped specs add about $100 to the price of the phone.

2. BlackBerry KEYone in Space Black from AT&T - On September 1st, AT&T began selling the KEYone in Space Black color scheme. Design-wise, it looks identical to the Black Edition, but specs-wise it's the same as the "Silver Edition" KEYone, with 3GB of RAM and 32GB of storage. AT&T is selling this blacked-out version of the KEYone for $500 outright, which is about $50 less than the original KEYone. With a date for the spec'd up Black Edition not being announced yet, I'm assuming AT&T has an exclusive on the color black in the US, at least for a little while, so for now if you're in the US and really want a Black Edition KEYone your best bet would be to buy it in Canada and get it sent over. But honestly, the price of ~$16 bucks a month is a pretty sweet deal.

3. BlackBerry KEYone Limited Edition Black from Optiemus India - The BlackBerry KEYone is now being marketed, sold and supported in India by BlackBerry licensing partner, Optiemus. While this phone ultimately carries the Made in India sticker (my understanding is some final assembly and software loading happens in India), as we saw with my review unit it's really the identical device to the BlackBerry KEYone Black Edition with 4GB of RAM and 64GB of storage. There is one exception though - the Made for India KEYone also features a Dual SIM card slot (note, the second SIM card uses the MicroSD card slot so if you're running two SIMs you can't take advantage of expandable storage). Note, if you're outside of India and decided you really, really, really needed to have a dual SIM KEYone, you could buy it from Amazon India (you'd need somebody in India to re-ship it to you outside of India), but keep in mind if you run into any need for support or warranty issues you would need to deal with BlackBerry Mobile India (Optiemus) and not BlackBerry Mobile (TCL).

4. Bonus - KEYone in China - Recently, the BlackBerry KEYone began selling in China through JD.com (their equivalent to Amazon). In reality, they're selling the Black Edition KEYone with 4GB of RAM and 64GB and one SIM card slot, but they're keeping it simple, and it's just called the BlackBerry KEYone.

Many times this year I've said that 2017 feels like the good 'ole days of BlackBerry are back, and this slightly confusing rollout just adds to that. If you think back to phones like the BlackBerry Curve, we saw different colors and iterations of the phone with every carrier. AT&T had the BlackBerry Curve 8300 and 8310 (with GPS!), while T-Mobile had the Curve 8320 (with WiFi!) and Sprint/Verizon launched the Curve 8330 in CDMA. And carrier partners often launched a special edition color exclusive only to them.

With TCL Communication aka BlackBerry Mobile effectively relaunching the BlackBerry phone brand this year as they roll out the KEYone to more and more markets, it's clear that they're working with carrier and retail partners on marketing and distribution partnerships (they're just not selling the phone online unlocked). It's a smart move as this one of those tactics that helps get BlackBerry in front of users again as in many places it's been out of sight and out of mind for many years (I love seeing the KEYone in Sprint locations!).

The downside of this, of course, is that with more partner wheeling and dealing happening, it's more likely that these types of situations arise, which can be a bit more confusing for us consumers. I get the mechanics of all this of course, but in CBK's head, it does feel like it would be easiest to just do one blacked-out KEYone and roll that baby out everywhere under the one name. Maybe with the KEYtwo! :)

One of the questions I've been receiving a lot of recently is whether or not the additional GB of RAM in the black KEYone increases the speed/performance of the KEYone and makes the Black Edition the KEYone to go for. Based on my usage to date (MrMobile's too - see his excellent video embedded above), I'd say not really, but maybe... it depends. Both variations are equally fast in regular use. More RAM doesn't make the phone snappier in daily use - technically where it could/should make a difference is that if you're running a lot of apps all the time that chew up RAM it'll help prevent slowdowns (especially as you're jumping back and forth between a bunch of open apps). So for some I could see that the extra GB of RAM could/should make a difference, but for me at least -- and I run a lot of apps -- it's felt more or less similar. As for more storage memory, while I always side with the more the better, the fact that you can throw in a MicroSD card if you need more storage space makes this benefit more of a nice to have than a potential must-have. If you watch my initial KEYone review I said I wouldn't mind a version with a bit more RAM and more storage, and low and behold that device now exists! Good going BlackBerry Mobile making dreams come true.

Overall, if you like silver and want to save some money, going with the Silver Edition KEYone is totes fine. If you like black and want the extra RAM, you're going to want to get yourself a Black Edition. And if you're on AT&T and like black and want to save some $$, the Space Black will work well for you too. And if you desperately want a KEYone with dual SIM cards, you can get one from India. It's going to be the same quality as every other black KEYone, but just keep in mind that if you run into any issues your support is through Optiemus and not TCL/BlackBerry Mobile who is supporting the KEYone in every other market.

May the Force Be With You

Phewww... So much for being super concise. It turns out there's a bit to know on this VADERBERRY. In a world where CrackBerry Kevin makes all the BlackBerry phone decisions, I think I would have opted for this special edition of the KEYone to be called the KEYone Pro or KEYone World Edition, jacked up the price a bit more if necessary, and rolled it out with 128GB of storage, 4GB of RAM and Dual SIM across all international versions and offered this configuration in both Silver and Black. That said, I'm super content they've spec'd up the KEYone a bit more more with an alternative color and version that fans like myself can get behind. And did I mention the blacked-out KEYone is damn sexy?! Easily one of the most eye-catching phones of all time.

Hopefully, that helps. If you have questions, drop them in the comments or our CrackBerry KEYone forums.

If you're interesed in learning more about KEYone and buying your own tap here!