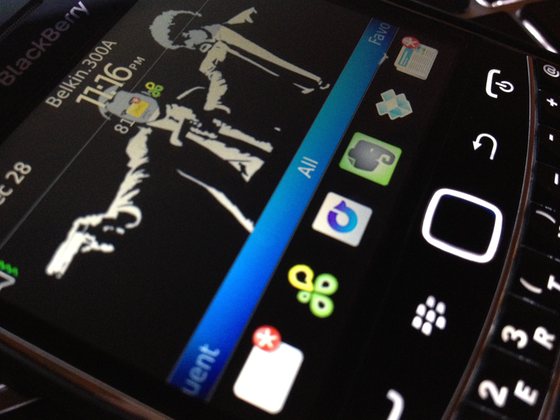 You ever just sit down and look at all the apps installed on your BlackBerry and try to figure out when the last time you used each app was? I used to be really into downloading every single new app that came out, trying them all out but I then realized I wasn't using half of what I installed on a regular basis.

Instead, I was just filling up my device with apps I rarely use, if ever. I since then have stopped my app hoarding and realized what apps I use most on my device were and if you're looking to know what they are, you can check out my full list of most-used BlackBerry apps for 2011 past the break.

While Twitter for BlackBerry has finally grown up to an app that is sufficient for most people, SocialScope still wins my heart when it comes to Twitter. Plus, something often forgot about SocialScope is the fact that it actually does more then just Twitter, with Foursquare, Facebook and Flickr integration SocialScope is a must have app on my BlackBerry.

One caveat remains with the app though -- it's beta and as such, not available to everyone who wants it. You'll have to ask someone already making use of it for an invite, in order to get in on the action yourself.

While there is plenty of music services out there to choose from on BlackBerry, being Canadian makes it difficult to find one that offers plenty of choice when it comes to music selection since big media still has their heads in the sand when it comes to licensing agreements.

For a lot of folks, Slacker is a great option but for me -- it's Rdio. The service does cost me $9.99 / mnth but it also allows me to stream and store for offline use music with no limits across all my devices. That includes iOS, Android and even on my desktop. No brainer for me, and a must have.

I'm forgetful. Ok, let's be realistic -- I'm beyond forgetful. If my head wasn't attached to my body I'd likely forget it somewhere and that's not a good thing. However, Evernote keeps me in line.

For things I need to remember or keep track of -- be it links, notes or even audio reminders Evernote is there for me. Plus, it's another one of those apps that is everywhere for me when I need it. iOS, Android and desktop -- Evernote has a client for them all.

A lot of my life depends on the cloud, I store pics, documents, videos and music there. I'm a bit of a nut when it comes to having things backed up, given the amount of personal items I've lost over the years thanks to hard drive failures, SD Card failures and just hardware failures in general.

Backing things up to Dropbox has become a habit for me now, and having the comfort of being able to grab files from there when I need them is important. Also note the pattern here again -- Dropbox has a client for just about any platform be it iOS, Android and most importantly, my desktop.

This is the odd app out here -- it's only available on BlackBerry products and that's fine. Ever since RIM bought out Viigo and consumed their staff and app, I've never been able to find a nice RSS reader that I enjoy using on BlackBerry.

That is, until BlackBerry News was released. Yes, it's not near as cool as Viigo once was but it does as I expect it to and that's deliver me my news while on the go. Plus, the sharing options and integration with BlackBerry are great and make it my one must-have app from RIM themselves.