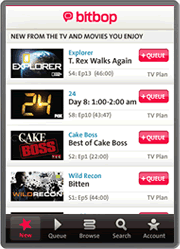 When it comes to gettting content on your device from big media outlets such as NBC, CBS and others its never been an easy task. While new things keep popping up, opening doors for content providers they always seem to be limited in one way or another. Enter Bitbop, which has just brightened the eyes of BlackBerry users (other devices to follow). A part of Fox Mobile, Bitbop is offering a Hulu like experience for BlackBerry users and has signed on some great content providers such as CBS, NBC and Comedy Central and finally, Fox themselves.

While the service is in beta and free at the moment, it has been mentioned that later down the road the service will cost $10/mnth for all you can eat full length TV shows with no commercials over WiFi and 3G. Canadian? Don't bother you can't access it. If you live in the US however, you'll wanna get in on this action while you still can. The service says Bold, Curve 8900 and Tour series devices but I'm sure a few others will work as well if you try em out.

Source: Engadget Via: mocoNews
They say it's for science