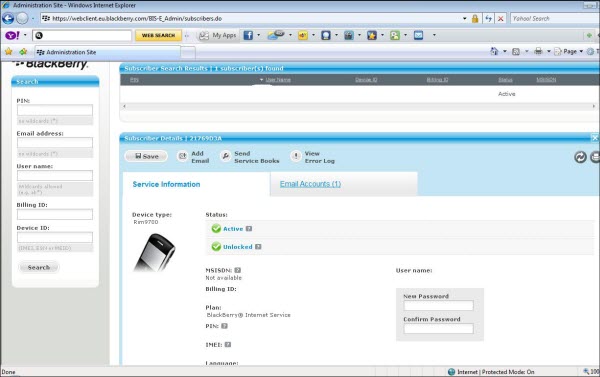 * UPDATE- After speaking with several folks, it looks as though the GMail 2 way sync portion is to be a gradual rollout. So no immed. access is available, it should arrive in the near future to users. Taking this approach ensures that all will work fine rather than releasing something then finding out it may cause an issue*

We've been talking about the BIS 3.0 upgrade for a while now. And while nothing really overly exciting was to come from the update, the one thing it had going for it appears to have been ripped out. Users in Europe are among the first to get the newly launched BIS 3.0 but many have been reporting that 2 way GMail sync did not arrive as expected. Say it isn't so? 2 Way GMail sync was one of the key features of this upgrade coming in the form of enhancements to the GMail plugin.

While all other things seem in place, Open Office support and items such as the update to the carrier portals as shown above from the pics sent to us from BB Master. The mystery behind the absence of 2 way GMail sync seems rather odd considering the Official BlackBerry Support forums are even claiming it's supposed to of have been released with this update. However, when you access the Research In Motion knowledgebase you'll see that the documentation there shows nothing regarding 2 Way GMail sync. The line, as shown on the official support forums has been removed from the knowledge base entry.

Since users are reporting the service does not seem to be available to them we're thinking someone, somewhere may have messed up with the documentation. In all actuality, we may not see 2 way GMail sync until BIS 3.1 is rolled out. In the meantime, sit tight while we dig a little bit deeper into this story and try and find out what exactly the real deal is here.