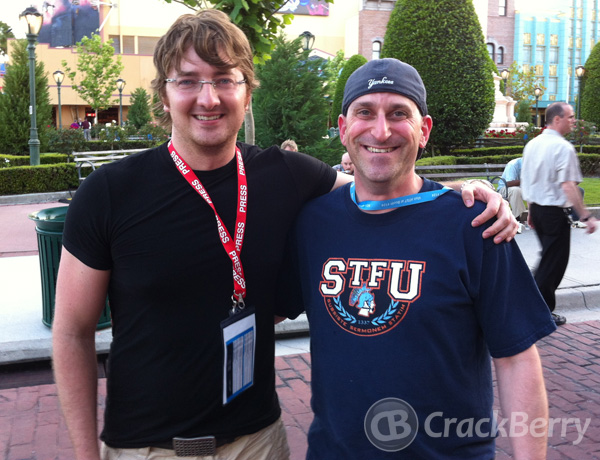 BlackBerry World 2012 (formerly known as the Wireless Enterprise Symposium, or WES for short) marked my sixth consecutive annual trip to Orlando for RIM's biggest event of the year. BlackBerry World always makes for an awesome week and for those of us who have been to a bunch of them, it's like a family reunion. Over the years I've made a lot of friends at BlackBerry World, and I always look forward to the event as it's our only chance on the calendar to all reconnect.

Going back to my first WES in 2007, I arrived knowing literally nobody. CrackBerry.com was still a new site -- barely four months old -- and it was my first BlackBerry event. Heck, RIM wouldn't give me a press pass so I paid my way in at full price as a regular attendee. Luckily, it didn't take me long to make a friend. Walking through the halls of the Marriott World Center, Ivan Kanner spotted my bright green CrackBerry t-shirt (pictured below) and shouted out it's CrackBerry Kevin! That was the first time anybody ever called me CrackBerry Kevin, and it immediately stuck. And not only did Ivan christen me CrackBerry Kevin, but he also welcomed me into his crew of friends for all the evening festivities that WES, and we've been reuniting every WES/BBWorld since. Suffice to say, Ivan is one of my BBWorld buddies I look forward to seeing in Orlando every year. Good seeing you this week Ivan!