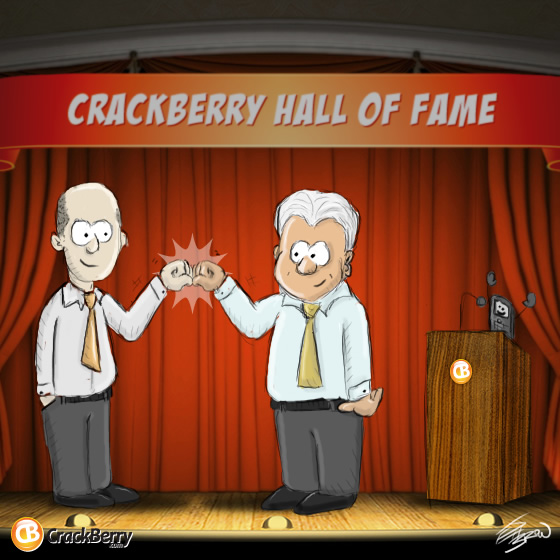 Mike Lazaridis and Jim Balsillie, you will always be a part of Research In Motion. And a part of CrackBerry. You've led RIM, you've built RIM for so many years that it is difficult to imagine the company that makes BlackBerry without Jim and Mike L. As co-Chief Executive Officers, you each worked to support each other: Mike knew how to make technology work; Jim knew how to make money and grow the company.

The first Research In Motion product was the Budgie, a system for displaying information on a television screen. Think PowerPoint meets Pong. It was not what one would call a commercial success. But Mike didn't let that stop him or the company. He took the lessons learned from the experiment and applied them to other jobs, other products.

Today, Research In Motion is a bit more successful with some 70 million BlackBerry owners worldwide. The Smartphone can be found in the hands of government officials, doctors, lawyers, students, teachers, the rich and famous, internet bloggers, and that guy down the street. There are BlackBerry lovers in countries all over the world; without Mike and Jim, that would not be so.

Waterloo is home to Research In Motion, and the company has never forgotten that. The University of Waterloo's Institute of Quantum Computing, the Perimeter Institute, the Centre for International Governance Innovation, the Balsillie School of International Affairs, and others owe their existence to the two leaders of RIM. It is said that Jim and Mike would be billionaires if not for the millions of dollars they've donated over the years.

CrackBerry, too, owes a debt of gratitude toward RIM's once co-CEO's. Without such a compelling product, the world's most visited BlackBerry blog, forum and store would not be here today. The awesome power of the BlackBerry, its features, and capabilities continue to bring new people to the platform, and to us.

Without Mike Lazaridis and Jim Balsillie at the helm, it is the end of an era. Yet at the same time, we're excited for change. Thorsten Heins has seen RIM in her greatest glory; he has seen the challenging days as well. There is a transition in place to ready RIM for another decade of excellence in the mobile computing space, a plan started when RIM acquired QNX.

The QNX-based operating system that will run BlackBerry Smartphones and already runs the BlackBerry PlayBook is a mighty, powerful one. Perhaps even the most powerful. It will be Thorsten who fosters the growth of this platform and brings this new generation of BlackBerry to the world. He has hard work ahead of him and two sets of rather large shoes to fill. We have faith in him.

Even before this past Monday's press call, Thorsten Heins had proved his commitment to listening to customers, enterprise and consumer alike. Minutes after the world learned of his appointment as Chief Executive Officer of Research In Motion, Thorsten gave a call to our Founder, Kevin Michaluk. The message, spoken by both the action and in words, was heard. Thank you to the CrackBerry Nation for your support and enthusiasm.

Even as Thorsten fills those rather large set of shoes, Research In Motion could not have turned her back on two of the men who created her. In their reduced roles on the Company's board, the knowledge and experience of Lazaridis and Balsillie will still be a formidable resource for RIM. Though now their expertise will be used to help others chart a course, rather than call the headings themselves.

Without the weight of one of Canada's largest companies riding on their shoulders, what will Jim and Mike do with their extra time? Will we see Mike L. roaming the halls of the Perimeter Institute, discussing the latest findings of the unseen world? Will Jim ever get his hockey team (we're rooting for you, Jim!)? Only time will tell how these men spend their well deserved time off and well deserved millions of dollars.

Mike Lazaridis and Jim Balsillie, together you and countless people at Research In Motion created the BlackBerry Smartphone. And, by extension, CrackBerry.com. From the bottoms of our hearts, thank you. Thank you for being so Bold as to think you could change how the world thought about email. Thank you for introducing the average consumer to the awesome power of the Smartphone, the awesome power of a BlackBerry. The CrackBerry Nation salutes you, good sirs, and we wish nothing but the best for you; Research In Motion; and that brand we love so dearly, BlackBerry.