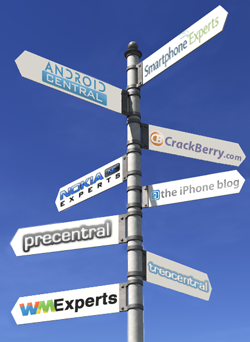 Each week we bring you the best of SPE. This week, The iPhone Blog brings you a gigantic Birthday Bash Contest with a grand prize of a Factory Unlocked iPhone 3G done up, Colorware-style. Crackberry.com had the WES 2009 Conference covered six ways from Sunday, too. Meanwhile, Nokia Experts stood out as the single best place to find out all there is know about the just-released Nokia E71x. There's much more, so read on!

We're pretty excited that Android 1.5 is getting pushed out to T-Mobile G1s this week and took a look at the official tour. Rumors of Android-powered netbooks persist but aren't quite enough to take our eyes off this sexy update to the G1.

If you've missed our stupendous WES 2009 coverage, we have you covered right here. The big news of the conference was clearly the BES 5.0 announcement, but the fact that the BlackBerry Curve 8900 is coming to AT&T is nothing to sniff at either. Not enough? How about the BlackBerry Onyx in the wild and confirmation that a Storm 2 is in the works?

A big big week at Nokia Experts! The Nokia E71x is out on AT&T and, well, there's some bad news to impart: AT&T locked it down pretty tight. The hardware is as good as ever, though. Fortunately for everybody, Nokia Experts is on the case with Tips for improving your Nokia E71x experience, walkthroughs for installing RoadSync 4, Nokia Maps, and Nokia Email, recommended E71x accessories, and a look at AT&T Navigator. On top of all that, a full review of MyPhone 2.1 shows you how to iPhonify your Nokia 5800 and the 8-hour-talk-time Nokia E52 was released.

As the rumors zero in on June 7th as the most likely launch date of the Pre, we saw somebody (likely Palm) release some sort of Pre hostage spoof and internal Sprint training videos surface. We learned that the Pre is heading to Canada and also Australia too. Meanwhile Best Buy continues to be a rich vein of Pre rumors as Palm Pre Accessories and Cases appeared on their systems.

TiPb Birthday Bash! That's right, to celebrate our first anniversary, we're giving away an UNLOCKED ColorWare iPhone 3G all decked out in your choice of custom finishes. We're also giving away a bunch of accessories like battery packs, earphones, Bluetooth headsets, and cases, iTunes gift cards, and a whole ton of apps. Contests end Tuesday, so go enter now and win, win, WIN!

Oh, yeah, and Apple released iPhone 3.0 Beta 5, with confirmation of a digital compass for the next generation iPhone hardware, age-based parental controls for the App Store, email podcast links from iPod app, and MMS and Tethering now locked out on AT&T?! We've updated our now-even-more massive iPhone 3.0 Walkthrough with all that and more, check it out!

Our Treo Forums have been active with talk about one of the perennial problems with Treos: ROMs. In this case, there are a lot of Sprint Treo Pros out in the wild featuring pre-release 1.03 ROMs instead of the official 1.04. We covered the topic and issued a buyer-beware to let you know that you shouldn't buy Sprint Treo Pros with the older ROM. Fortunately, if you're stuck on a 1.03 Sprint Treo Pro, these instructions in our forums should be enough for a Sprint employee to upgrade your phone.

A relatively random smattering of news last week. Thw Windows Marketplace for Mobile has opened to developers, and we learned what apps won't be allowed. We got leaked launch dates for the T-Mobile Dash 3G and Touch Pro 2. We found the Palm Treo Pro for $249 at Best Buy (with contract). We learned that Nine Inch Nails' Trent Reznor isn't a fan of WinMo. Sony Ericsson's CEO called the Xperia X1 "an experiment," and we reviewed the voice-controlled BlueAnt V1 and HTC Touch Dual.