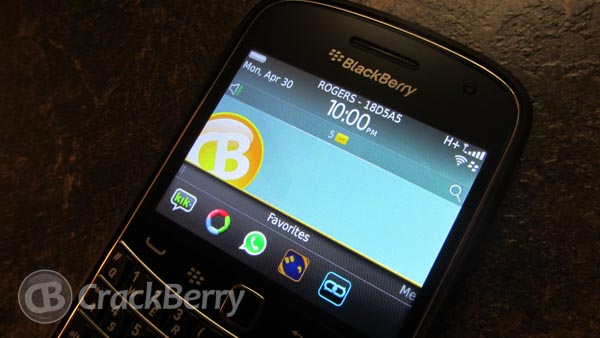 One of the most popular features that has many flocking to, and staying with, the BlackBerry platform is BlackBerry Messenger. One of the best parts of BBM is having real-time confirmation when your BlackBerry to BlackBerry instant messages are successfully delivered and read. BBM is all about reliability in communication and the power of knowledge. Once that ‘R’ pops up, in your mind you know that you should expect a prompt reply...hopefully. It’s not just a single letter from the alphabet that has me hooked – it’s how many options BBM gives me. Ever since BlackBerry messenger first came out, it made a strong case of being forever superior to text messaging. I can add contacts to my network, use the personalization options I have to let my network know who I am and what I’m thinking or even make use of BBM connected applications to be more social while playing games or checking in at a venue. A standard SMS is 160 characters, which seems like a lot compared to a 140 character tweet, but it seems inefficient compared to the 2000 character limit of a BBM.

Instant messaging, in general leaves SMS in the dust, as it allows you to actually have a conversation, rather than broken thoughts and sentences that are easy to get confused -if there’s a 2 part SMS, you might get the second part first. Of course not everyone uses a BlackBerry, and those who may not know better may resort to using SMS to keep in contact with friends and family that use other platforms. Luckily, there is quite a selection of cross-platform messaging applications out there that keep you in the loop, regardless if someone is using an iPhone or a smartphone powered by Android or Windows Phone 7. Keep reading to see which one may be best for you.

Like I said before, you definitely have more than a couple of options to look at when it comes to cross platform chit chat. The problem lies in getting the features you want. You may be used to BlackBerry Messenger and come to expect the exact same functionality when talking with someone using a different platform. As the song goes, “You can’t always get what you want, but if you try sometimes, you get what you need”. That being said, don’t forget that there are a good number of applications that do offer many features that you’re looking for.

Whenever I hear someone asking what they can use to chat with users on other platforms, WhatsApp always comes up. It’s arguably the most popular cross-platform messaging application. It’s also one that offers a lot of the additional features that many have been hoping to get. You connect with your contacts by entering in their mobile number; no email accounts or special PINs, just their digits. You have the standard push, sent and received notifications, which we come to expect. They’ve most recently added the “Share Location” where, as you may have guessed, you can send the person you’re chatting to your current location or choose from a list of locations around you. They’ve also included the ability to set a group icon for group chat. Now that’s on top of some amazing features like exporting chat history and implementing a broadcast message. It could be said that WhatsApp has quickly become the standard for cross-platform messaging applications. This would probably be my go-to application, though I am hoping to see them be able to add custom backgrounds, like you can do with the iOS and Android versions.

Until recently, Touch had been the application my wife frequently used. Now that the developer has ceased support for Touch’s predecessor PingChat, they can focus on adding to the impressive feature lineup that has been built into Touch. While it may not have an export chat history option available, it does boast message encryption and the ability to block people. The layout of touch is extremely fluid and provides more of a social network type of feel, through its Activity Stream, that makes you almost forget the cross-platform messaging capabilities. You are able to send media, as you can with most apps of this type, but you have to do so from within Touch itself. It’s not an easy process either, as you have to scroll through a list of your pictures and/or videos until you get to the right one. Whatsapp provides functionality within the BlackBerry menu, allowing you to quickly send the image or video you’re looking at. Additionally, the response time of touch is outstanding. If you are a Pingchat user and you want to upgrade to Touch, you’ll find the process to be effortless.

The developers couldn’t be bothered to use all of the letters to spell connected correctly, probably because they’re too busy making sure the rest of the world stays connected through Cnectd! Still sporting a Blue and Orange motif, Cnectd gives you no nonsense, quick connectivity to your contacts. Cnectd was one of the first few who had sent/read notifications, which made it very popular in the past. They also provide location sharing and access to connect with your Facebook account, in order to create a profile and automatically add contacts who already have Cnectd. The only downfall I saw with Cnectd was the licensing requirements. Sorry, there’s no way I would spend money to use Cnectd for a limited time. As great as the functionality is, I can’t justify it.

If you haven’t been living under a rock, you may have heard the name Kik kicked around over the past year and a half or so. While we first heard of it as the Kik music app, which was supposed to enable users to buy DRM-free music directly from the BlackBerry, we eventually came to know it as one of the popular alternatives to BlackBerry messenger. The sent, read and delivered stamps are all present and loved and the speed is fantastic. Even though it was removed from BlackBerry App World, you can still download and use it, thanks to an open connection to Kiks servers. If you do decide to install it, don’t tell RIM I sent you there, I don’t want to get into any trouble!

Great, yet another app that doesn’t want to be spelled properly. Given a quick run down earlier this month by Bla1ze, Hookt Messenger goes above and beyond BlackBerry Messenger. You can not only used Hookt on your BlackBerry, but also from your computer or even your PlayBook. That way, you can chat away without looking like you’re messing around with your BlackBerry all day (I’m not saying it’s a bad thing mind you). You can also send your contacts one of dozens of stickers. The layout is simple and smooth, allowing you to focus on chatting and functionality.

Recently, CrackBerry forum member wout000 put together a fantastic comparison chart, which covers pretty much all of the main cross-platform messengers. wout000 took the time to reach out to the developers to see what they can or can’t do, as well as which platforms they work on. For the full image, as well as the original post, click here. Great Job wout000!

Besides these cross-platform specific instant messaging applications, you do have a few other options. These days, you can’t throw a stick without hitting someone who is on Facebook, Twitter, Google+ and other social networks. So why not use them as your main means of communication? On top of that, you have applications such as IM+, Nimbuzz that offer support for multiple social networks and instant messengers. My fallback choice would be the Google Talk application, as I would frequently chat from my contacts on there from my computer, so why not take the conversation with me?

So there you have it, there are many options to choose from. Which ones are you using already? What should be added to the list? Let us know.