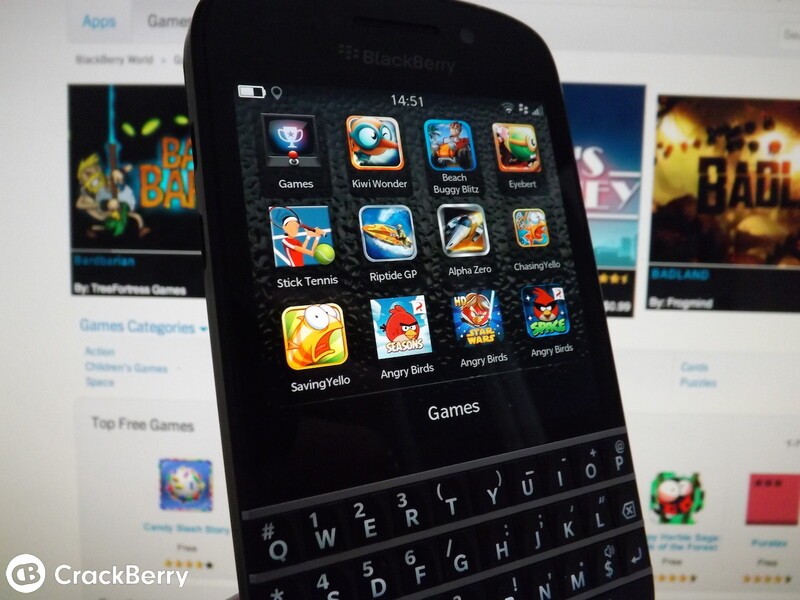 It was the recent how do you use your BlackBerry 10 home screen post we featured recently that lead me to think of this one. Adam published screen shots of the apps we use the most and mine was the odd one out as the rest of the team are rocking the Z30 where I still use the Q10 as my main device.

I'm sure I've mentioned this before but the main reasons for me sticking with the Q10 (although I have a Z30 also) is the physical keyboard, device size and great battery life which is removable. Anyway, I digress, so back to business.

The following list could go on and on so I'm going to keep my selection to my top ten.

Beach Buggy Blitz has been around for BlackBerry 10 pretty much since day one. When we first went hands on with it we were using the BlackBerry Z10 but once the Q10 rolled out the game was soon made available for hardware keyboard users. With options for either touch or tilt controls the game sees you driving your buggy around a selection of beaches, collecting coins along the way.

I have to say that the gaming experience is just as good on the Q10 as it is on the all-touch BlackBerry 10 devices.

Coincidentally, Riptide GP comes from the same developers as Beach Buggy Blitz and is another beauty that has been around for over a year now. Once again, when we first featured the game it was on the Z10 as that was the only BB10 handset available, but like Beach Buggy Blitz the transition to the Q10 was a smooth one.

If you fancy some action packed jet ski racing, with glorious graphics this one will be right up your street.

Platform time and Eyebert is the perfect example of how great platform style gaming can be on BlackBerry 10. You control Eyebert and his trusty companion Faebie (who follows him) as you navigate the perils of each level, collecting gems and spheres along the way to not only earn you points, but also to unlock further bonus levels. It's a little gem this one and free to download. If you have a Q10 I'd urge you to give Eyebert a go.

You can check out our hands on video with the game here.

Stick tennis has been a firm favorite of mine since it graced us with its presence in early 2013. Another superb game that's free, it offers a bunch of different tennis match options and although game play can take a little getting used to it's well worth persisting. You do get a tutorial at the start, but like many games - practice makes perfect.

All controls are gesture based and with sweet graphics and realistic sound effects it makes for an all round beauty of a game.

Another classic that's been around on BlackBerry 10 for over a year now, but one that's stayed firmly on my device.

But you don't just get one game with 10 Pin Shuffle - there are three within the game. First up is standard bowling, which is my favorite. Rather than using a traditional bowling ball a kind of puck is used - similar to in Ice Hockey. This adds a nice twist to the game and sliding it towards to skittles just feels good.

There is also an alternative version of bowling called Five Card Draw Poker. I don't know how to play poker so I won't try and explain or understand the scoring system but if you do know how to play it should be fun. And finally is Shuffleboard which apparently is a game played in bars. You need to slide your puck as close to the edge of the table as possible to score maximum points.

I'll be honest and say that playing Real Racing 3 isn't nearly as good as on all-touch BlackBerry 10 devices just due to the screen size and dimensions. However, if you own the Q10 and want the ultimate racing game this is is certainly it.

The game is highly addictive I must warn you, but that's a good thing right? It's a big file - at over a GB in size so make sure you have plenty of space on your Q10. It's well worth it though - and free to download.

Puzzle time and Chain Dots is the perfect way to kill a few minutes. Once you start Chain Dots you are presented with a grid of colored dots and its just a case of drawing a line between adjoining ones that are of the same color. This can be done in any direction and in reality there are no limits in terms of how many dots you may get in the chain. The longer the chain - the more points you earn and its all about how high you can score in 60 seconds.​ With beautiful colors and the challenge of being up against the clock Chain Dots offers great value at $0.99 in my opinion.

Despicable Me: Minion Rush is perfect for both children and adults. The aim of the game is simple. You run through Gru's lab or residential area collecting bananas while avoiding obstacles. Every now and then you'll have to face villains, such as Vector or the girl scout who had cookie's stolen from her (from the movie). At the same time, there are other Minions pitted in many places during your run. Try and knock them off the track and be despicable to them in order to increase your multiplier level.

With the addition of small missions too what's not to like? The game is free - so go and give it a go if you haven't already.

This one's a labyrinth style game where you use the tilt controls on your BlackBerry to guide your orb/disc through each level, collecting capsules along the way. It's not as easy as it sounds though but it is a whole bunch of fun.​

Features of the game include:

If you managed to get hooked with the original Cut the Rope then you'll certainly want to hit up the sequel - Cut the Rope Experiments. After huge success on other platforms us BlackBerry 10 users got a slice of the pie and the game is just as good on the Q10 as on the likes of the Z10 and Z30.

There's literally hours of fun to be had here and for a couple of bucks I have to say it's money well worth spending if this style of puzzle game is your thing.

Key features of the game include:

There you have it - my top 10 games on the BlackBerry Q10. I'm sure many of you will have your own preferences and if you do feel free to sound off in the comments, but for new customers picking up the Q10 these 10 games are well worth checking out. Enjoy