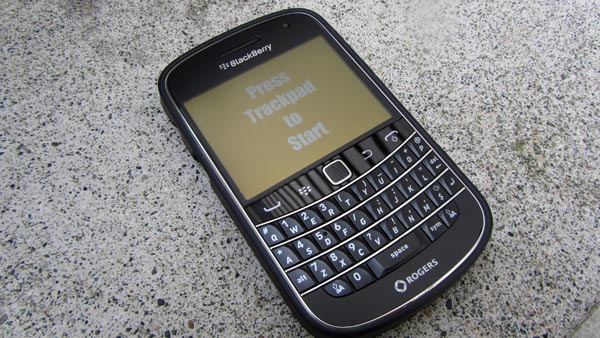 You always have to find time to put a little fun into the everyday workload.

All work and no play makes for a disgruntled employee, who is one email away from freaking out!

Not that I speak from experience mind you, but as you move from meeting to meeting, taking a break, or on your daily commute (via public transit), games are a great source of entertainment and stress release.

Primarily being a Bold 9900 user, I find the keyboard and touch screen the perfect combination for not only communication, but for gaming.

In order to help you be productive in being non-productive, let’s put the search on hold and look at the best games for the BlackBerry Bold 9900 and 9930.

Be sure to read alllll the way to the bottom, as there are a LOT of great titles in here for the 9900 and 9930 user! (Enjoy!... and let us know which title(s) are your absolute favorites in the comments!)

It slices, it dices, it blends one mean fruit smoothie. Okay, maybe not blending, but I think you get the idea. Fruit flaying games are big hit in my household and the Fruits and Ninja game is by far one of the most fluid games of its type. If you’re not familiar with this type of game; essentially your finger is a katana. You swipe the screen to slice fruit that is tossed into the air. Now if you consider this type of game to be orange juice, this particular one would be pulp-free! Fruits and Ninja has three different game modes; Classic (includes bombs and the “3 strikes” rule), Arcade (no 3 strikes rule, but timer is active and bombs reduce the score) and Zen (no bombs, no 3 strikes, just fruit and a timer). Besides the addictive nature of the game, I found myself continuously striving to get the available achievements, like Fruit Fury (500 fruit killed). This is touch screen gaming at its best.

More information on Fruits and Ninja

This game is a take on the classic Bomberman maze-based game. Rather than a robot in a bodysuit, your character is a human, garbed in military gear, including a combat helmet. Your mission, should you choose to accept it, is to rid each level of its squatting undead baddies with good old reliable bombs. I like how there are two ways to win; either through complete annihilation or through a found key. For more explosively goodness, you might want to go for the former, rather than the latter. Your Bomberman’s movement is controlled by your trackpad. You also press the trackpad OR tap on the touch screen to place a bomb. The game is jam packed with bonuses and various types of bad guys and bombs. This is one game that proves you don’t need a big screen to play a great game.

Birds aren’t the only ones that are allowed to be angry. No fowls in a foul mood here, we are talking about a pissed off porcine or two. In this Angry Birds-like game, you fling pigs at some big bad wolves. Aim your bacon brigade just right in order to effectively kill the targets, while getting the maximum points. As you progress through the levels, you gain access to other piggies with different abilities. Now you really have to strategize or else you’ll end up on a plate next to some eggs and toast. The game play is surprisingly quick, as we’ve seen similar games with lag. The free version gives you one game pack, while you can get the paid version to open two more. There’s also an Angry Pigs Season to install, as well. If all else fails, you can call on/purchase Wrath of the Hog to clear the level for you. While you can get Angry Birds for the BlackBerry PlayBook, this (in my opinion) is the best alternative for the BlackBerry Bold 9900/9930.

Brain Cube will either leave you feeling like a genius or a block head. This is one of the most intriguing games I’ve seen in quite some time. You take control of a two block high character with a sarcastic expression. With no limbs to speak of, you flip and flop your way across a puzzling path of tiles towards the goal. It’s all about being at the right place (and position) and the right time. The graphics are simply beautiful, which adds to this unique game. To add another challenge, you are tasked to find “energy” through the levels- on top of this, you’ll encounter obstacles such as having to activate bridges, encountering springs and single-use tiles. Your trackpad has never been so well used. Brain Cube is one that is sure to please.

While your brain is still feeling puzzled, we might as well look at one of the most popular (and colourful) puzzles you can get on your BlackBerry Bold 9900/9930. In the beginning, your screen is a jumble of pixelated colours. Start in the upper left corner and change the colour so it matches the colours touching it. Repeat this until your screen is of one single colour – just make sure you do it in 21 moves or less or else it’s game over for you. No animation, just pure puzzle madness. You can easily change the colours by using the stationary palette at the bottom of the screen. You can change the game around by selecting the grid size, difficulty and how the game should end. Pixelated is free, but you can gain even more options by upgrading to Pixelated Plus. For me, I’m more than happy with the free version.

This pool hall game was recently added to the free app/game line-up from RIM for a limited time. Even if it wasn’t on sale, I would have still installed Aces 3D Pool. Besides having a love and respect for the game (but not being all that great at it), Aces 3D Pool really shows off how fast and smooth 3d games can be on BlackBerry smartphones. For games types, you can either choose to enter a tournament or play a quick game against a simple opponent. Once you get a hang of the controls, the fun really begins. I absolutely love being able to change the precision of the aim and being able to see pop-ups that indicate which ball you are targeting. There is no lag between turns or setting up shots, which makes for intense and exciting gameplay. Do you have what it takes, cue ball?

Ziptrix is a beefed up version of Tetris. Now while Tetris is an amazing game on its own, this game provides a couple of different modes to choose from. In single player mode, you play Ziptrix just as you would with Tetris, but with the appearance of obstacles to overcome. Over a Bluetooth connection, you can challenge a friend in Multiplayer mode. The competition definitely heats up with the option to impede your opponents efforts by adding to their playing field. If you love Tetris, but find that you’ve gotten a little bored over the years, Ziptrix is here to reignite that puzzle solving fire within you. Keep in mind that you will be playing the game while holding your Bold sideways; everyone around you will think you are taking a video or picture.

You can never forget about a good old game of cards, can you - especially when you can play it on your BlackBerry smartphone? Who needs to shuffle through the deck when all you have to do is launch a game? One of my favourite games to play is Solitaire. Not because I’m antisocial, I just love the gameplay. One of the best solitaire games available for The BlackBerry Bold 9900/9930 is the aptly named Solitaire. (Well, Solitaire Free, to be precise). While the Solitaire rules and gameplay are the same as they have always been, this game gives a beautiful layout to enjoy while playing. It’s highly responsive without causing you to make any accidental moves. If you do end up making a mistake however, you to have the option to take a step back. Don’t worry, I won’t tell anyone if you do.

There you have it. Some of the best games out there for your BlackBerry Bold 9900/9930. Now the question that remains is what game is your favourite? Is it something on this list or another title? Do you agree with this lineup? What would you add?