"The BlueAnt Q2 is rich in both design and sound " 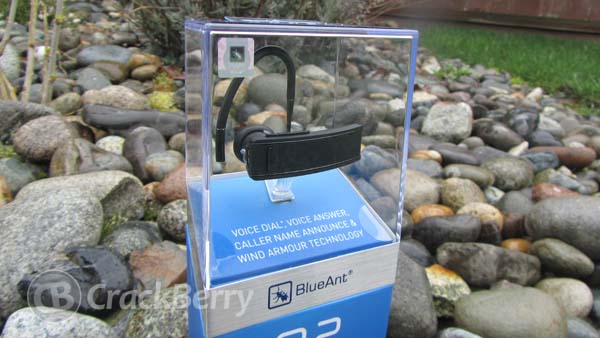 I have been a long time user of the Bluetooth headsets from BlueAnt. I've become spoiled by the voice commands that they offer. They first had me when I did my initial review of the BlueAnt V1 Bluetooth headset. It had been my longest run with a Bluetooth headset before I started using Bluetooth speakerphones. After deciding not to limit my Bluetooth calls to the car any longer, I immediately realized that the speaker phone was not the best solution, especially at work. Now I could have fallen back to my faithful BlueAnt V1, but human nature kicked in and wanted to see what was new and potentially better. What I found was the BlueAnt Q2 "smart" Bluetooth Headset. While much bigger in size in comparison to the V1, the number of improvements it had were equally as large.

Now besides the BlueAnt Q2, I also found in the package a black velvet pouch, a blue envelope with Read me on it (contained reading material), 6 ear tips in all, an ear loop and the MicroUSB travel charger. The packaging was one of the first downfalls that I found. Yes it was of high quality and all but the plastic hook would not give up the BlueAnt Q2 without a fight. I had obviously won (though it looked grim there for a moment), but the Q2 was slightly scratched in the process. The box containing the travel charger was slightly difficult to remove, as well. After the struggle, it was time to try the Q2 on for size. It was a perfect fit straight out of the box. Yes, you heard me. Finally, after all of these years, I could now use a Bluetooth headset without an ear loop!! Huzzah!

The Q2 has a curved design, much like the jawbone line. The power switch is located at the back, just underneath the charging port. The multi function button, which was a glowing BlueAnt logo on the V1, was now a simple line design on the Q2. Too bad, I rather liked having a glowing blue insect near my ear. The body is adorned with a plastic honeycomb design that covers the dual microphones. The volume up and down buttons can be found on the side.

When I turned on the Q2, I was warmly welcomed by the same voice I became familiar with on the V1; it will walk you through the pairing process. After you pair the Q2, you are informed that the headset will automatically transfer contacts from your address book. This is to allow the Q2 to announce the contacts as they call you using Text To Speech technology. The headset can transfer a maximum of 2000 contacts from a single device. It will provide the number only if you do not have the caller in your address book.

All that you have to do to use the voice commands is use the Multi-Function button (it will say "say a command". If you press the button by mistake, you can simply say "cancel" to back out. The voice commands allow you to vocally prompt if you want to answer or ignore an incoming call. You can also call the most recent incoming call back, redial, update the phone book and more. One feature that is a huge addition is the Vlingo SafeReader support that the Q2 has. If you have Vlingo installed on your BlackBerry smartphone, the audio is transferred to the Q2 automatically. You'll hear Vlingo's voice kick in to read you your incoming messages. You can also manage Vlingo commands such as opening the calendar using the headset. Now you can easily manage Vlingo without holding your BlackBerry up to your mouth- the Q2 will effortlessly transfer relay the message.

For searches, the BlueAnt Q2 makes use of the BING-411 service, unlike back in the day where the V1 used GOOG-411. Through BING-411 I could easily inquire about showings and locations of a particular movie, navigate to a specific location, ask about the weather, get market updates, catch up on news, sports and traffic.

The audio quality was excellent for both calls and playing music, it was truly HD audio as they claim. The on-board noise cancellation technology provides wind noise reduction for speeds up to 22MPH, which is twice the industry average. This makes calls while you're walking and talking very smooth. The dual microphones captured my voice loud and clear. The music was also crisp and easy to listen to. The only thing missing is the ability to switch tracks.

The Q2 is the perfect replacement to the V1. Though the V1 can stand with the best of the Bluetooth headsets out there, the Q2 is leaps and bounds above with its HD audio quality and compatibility with Vlingo's safereader feature. The BlueAnt Q2 is a must have for those to are looking for sound that's music to their ears.