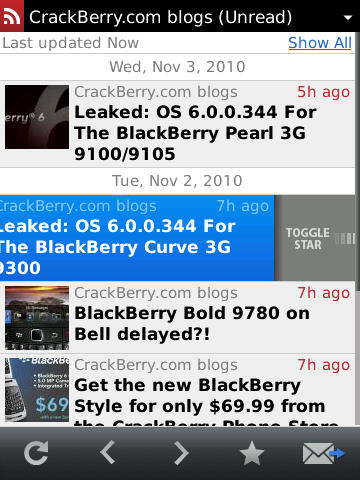 The folks at BellShare, winner of CrackBerry's 2010 BlackBerry App Developer of the Year award, have released an update to their popular Google Reader client for BlackBerry, aptly named BerryReader. Version 1.1 brings with it a number of changes, which include:

Overall it's a great list of improvements. I personally love BerryReader. I installed it when it first came out and have been using it religiously ever since. It stays fully synced to my Google Reader account and you can still read stories even when you don't have a network coverage. It's definitely a nice app to have, especially if you're on a non-BlackBerry 6 operating system.

Save 50% on BerryReader Today Only: BellShare has set up a 50% off coupon code for BerryReader. Use coupon code berryreader11 at checkout from our Mobile App Store or App Store Client and you can get it for $4.97 vs. it's regular $9.95 price. Make sure you're seeing the discounted price before you complete checkout and note that the coupon code only works from our on-device stores.