A few days ago I was lucky enough to get to attend the BBM Hackathon event in New York City, where they brought together around 30 BlackBerry developers. The event was put together to bring some developers into the same room as the experts from RIM to see what they could develop from the BlackBerry Messenger Social Plaftform. This experience was rather eye opening as I am not sure that many end users understand just what goes into development of these applications that we love so much. While at the event I was able to gain a lot of insight from these guys, and there was tons that needed to be shared with you, so let's take a deeper look into what goes on behind the scenes, why these guys love the BlackBerry platform so much, and how much of a struggle they go through to determine proper pricing for their application.

Having all these amazing developers, along with some experts from the RIM development team all in the same place, watching them all help each other out and share ideas was an experience I never thought I would see. Usually when it comes to ideas developers are a bit more on the quite side, as they don't want their idea to be done by someone else, but these guys were all willing to talk, share ideas, share their secrets of how they get it done, and use others as resources. The developers all felt comfortable with each other, and didn't feel in competition with each other, but instead that they were all a part of the same team, a team in which they wanted to make successful and ensure that they were bringing to the table the best applications they possibly could. 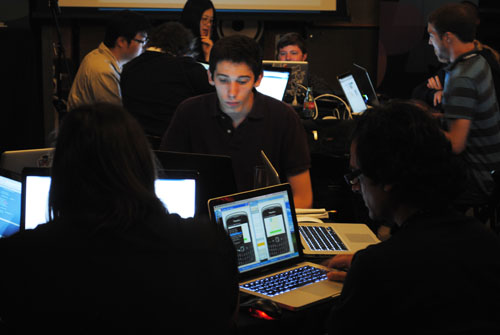 One of the most common messages that I got from each and every developer that I spoke to was that they loved the BlackBerry platform and they loved developing for it for many reasons. While the answers varied from the ability to integrate many third party applications to the core functionality of the device through the SDK and Platform resources available, to the support tools that RIM has provided, to events such as DevCon and newer ones like the BBM Hackathon, they all felt they had the things they needed at their fingertips. While developers do have daily struggles, and some of the tools are a bit difficult for them (more on this later) they all felt that the end product was worth a bit of pain to acheive.

While talking to many of the developers I asked them if they had developed for other platforms, and if so are they still currently doing so, or have all efforts been focused back on BlackBerry. The answers varied since some of the folks develop for large companies that require them to to Android and iOS development, but the vast majority of the developers that have dabbled in development for other platforms ended up giving it up to refocus on BlackBerry, and a large part of the interest spike was around the BBM Social Platform. The developers loved the fact that they are now able to connect one of the most popular pieces of a BlackBerry, BBM, which has over 45 million users, to their applications, allowing friends and family to discover the application and potentially gain the interest of many new users this way. Statistics show that users are eight times more likely to use an application again that allows them to interact with friends, family, or even complete strangers, than they are to use an application that is completely independant. For developers, the ability to add this social integration was huge, and they are extremely excited about it.

If you have ever downloaded one of the leaked device simulators, or tried any of the other RIM development tools you may have noticed that they aren't perfect, but they do a great job in allowing the developers to get their jobs done. While on scene at the Hackathon I saw first hand many of the struggles that the developers go through, countless reboots of the device simulators, having multiple browsers open, and various RIM development tools open, and all of them seemed to be quite content with having to do so. Luckily for the developers they had the open ears of many of the RIM employees who work on these tools, and were able to show them struggles that they had, and were able to get tips and tricks from them to fix some of the common, and some not so common issues. The developers felt that the struggles which they faced on a daily basis were worth the headaches, since the end product was what really mattered, and the consumers should not be punished for development issues. This lead us to some very interesting conversation around application pricing, and the struggles that developers have when launching a new application and attempting to pick a fair pricing.

Sure, we wish every application that we wanted was free, because then we could have them all, but how do developers feel about this? Oddly enough some developers find the hardest part of BlackBerry development to be the pricing structure, to find a good price which will entice users to want to try it, and allow their bank accounts to do the same. Many developers would love to give their work to the users for free, they do it for the users to enjoy after all, but that would not allow them to place food on their table, or a roof over their head, which they need as well. What I learned is that many of these developers do this work as full time work, most with small companies of a few developers who spend a large majority of their time coding and testing, and that work like any other deserves to be rewarded.

The pricing of an application goes far beyond the original purchase, which is something that many users tend to forget. Sure, an application may cost you $2.99 today, but the update that comes in a week, which the developer spent all those hours to correct bugs, add features and make it better for you, they aren't asking for any money for that. Developers need to ensure that they are able to set that time aside in the future for those updates, and unfortunately that time is not free to them, it takes away from potentially coding another application which could drive profit to them. The next time you see the price of an application, try not to think of it as spending that on an application for just today, think of what else you would buy with the money keeping in mind you are paying for not only the application to aid your life, but also the future support that will come along with the application.

RIM has caught quite a bit of bad press lately, many saying they are dying and other similar negative comments, but the developers disagree completely. The folks at foursquare took the stage to give us some insight into just how much BlackBerry users affect their application, and I have to say, be prepared to be amazed. Recently foursquare has nearly doubled their most downloads in a day with 190,000 downloads in a single day of their most recent update, which they are extremely excited about. For about the past two weeks more users have checked in on BlackBerry devices then Android or iOS, which is huge considering Android is boasting 550,000 activations daily, and iOS is argued to be the top in profits. With each update they continue to see more and more users downloading, and while they have only just dabbled into the social integration, they have plans for much more to come.

With this being the first event of its kind, no one was really all that sure of what would take place, or what the overall feeling of the event would be, but the developers loved every second of it. They were given places to use until the wee hours of the morning, many of the developers stayed up until 2 or 3 am coding, and trying new things, testing the limits of what they could do. The developers were excited to see RIM giving them as much support as they did, having the experts walking around, answering questions and more was a huge help to them as they learned the in's and outs of the new features. In the upcoming months RIM has promised to host some web sessions so that developers will have access to these experts without having to track them down, this will be dedicated time that they can ask the questions and get the answers to help them continue on with their development.

This event was a very unique experience, one that opened my eyes to a lot of things that take place behind the scenes, and allowed us to see how supportive RIM is of the developers on their platform. Be sure to keep an eye out as applications continue to get updated with BBM integration, and we look forward to seeing some completed products of what the developers spent their two days in NYC working on.