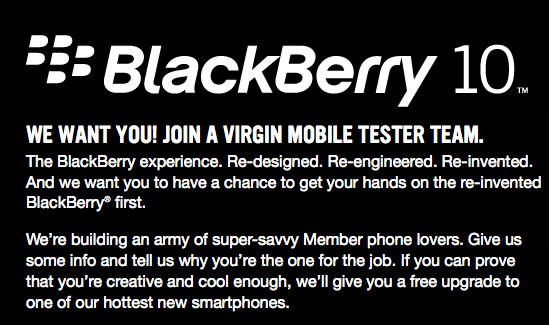 With Virgin Mobile Canada already confirming they will indeed be carrying BlackBerry 10, they're now offering folks a chance to be among the first to go hands on with BlackBerry 10 by becoming a part of the Virgin Mobile tester team. By now, you're probably wondering what that even means. Well, here's the deal if selected:

Simple, right? You get a BlackBerry 10 device and you tweet out tips and tricks you learn during your time using BlackBerry 10 so that others may learn as well. If you're interested in adding your name to be among those chosen, head on over to the Virgin Mobile Canada site using the link below to get started. Thanks, Richard!

Become a part of the Virgin Mobile tester team