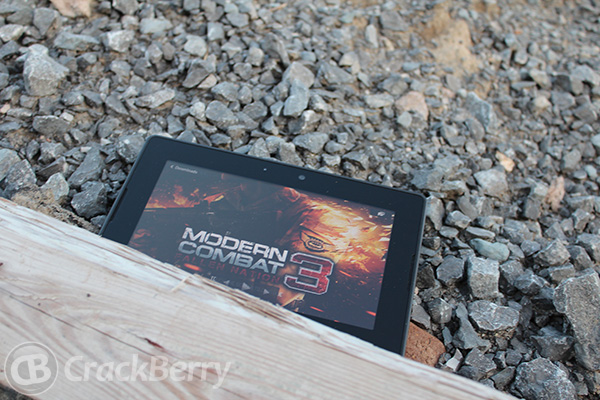 Since the early days of the BlackBerry PlayBook, Gameloft has been bringing new titles onto the platform at a steady cadence. Recently they launched yet another chapter to their popular Modern Combat franchise, Modern Combat 3. The new addition continues on what the others have started, but pushes the envelope just a bit more. The developers of this game say that the game features next generation graphics. But does the game live up to the hype? Continue reading for the full CrackBerry review of Modern Combat 3 for the BlackBerry PlayBook.

BE THE HERO OF AN EXPLOSIVE SOLO CAMPAIGN

Gameloft has done a phenomenal job at creating a captivating storyline that keeps you wanting more. From the first cinematic cut scene to the last intense battle, you'll be fully immersed in the characters and the story. One thing that games on mobile devices typically lack is the ability to tell a story and keep the user entertained, Modern Combat 3 for the BlackBerry PlayBook changes the norm.

Modern Combat 3 is a first person shooter that incorporates on-screen controls, cinematic cut scenes and artificial intelligence to carry you through a world where war, is the only option. The overall game play was well done, and was enhanced with character acting that was actually quite good. There is one thing I noticed while playing Modern Combat 3, and that is the issue with on-screen controls. If you have the controls on their default layout and place your right thumb to the top portion of the screen you often mistakenly throw a grenade, an issue that could be fixed if you could move the location of those controls.

Graphics junkies rejoice! If you're a mobile gamer that lives for the cutting edge graphics, then Modern Combat 3 for the BlackBerry PlayBook will not disappoint. Modern Combat 3 uses a gaming engine that competes with the quality of the Rage and UNREAL gaming engines to provide state of the art mobile gaming visuals. One of the cool things about the HD game graphics and visual effects is that they help fully immerse the player in the games storyline.

The developers at Gameloft Montréal have provided a plethora of in-game settings to make your gaming experience just a little bit better, because remember in Modern Combat 3 it's between life and death. Within the game you have access to change the language, sound levels, and also change a wide verity of assisting alterations like aim assist and more. Probably one of the handiest settings is within the control settings page. In the control settings you can invert the Y-axis, change sensitivity, and select between three different virtual controls layout to give you the competitive edge.

While there is no multiplayer (just yet), Gameloft has done a fantastic job bringing Modern Combat 3 to the BlackBerry PlayBook. The game features an AI engine that will keep you guessing as to which way your enemies are going to come from. The game also has some of the best graphics I've seen on any mobile platform to date. Modern Combat 3 for the BlackBerry PlayBook is unquestionably worth the download and can be found in BlackBerry App World for $2.99.