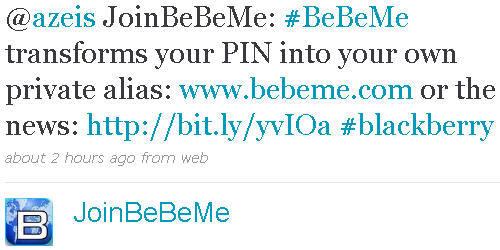 As bloggers our duty is to carry forth the news of the BlackBerry world and pass it along to the CrackBerry Nation. We are always on the lookout for the latest and greatest, and try to keep everyone in the loop the second something new comes along. This morning I had a mixed emotion when I received this tweet from a new service called BeBeMe. At first I wrote it off as spam since it just magically popped up on my timeline (along with numerous other users timelines apparently), but after looking into it I discovered it was actually a new service and it piqued my interest. Unfortunately I didn't get too far. I did read over their press release from this morning and learned that the service apparently lets you convert your BB PIN and email to an "alias" and use their features such as a global address book, IM and RSS content. I couldn't for the life of me find a sign-up link on the page, and after numerous attempts to "See if your BeBeMe is available" with handles such as azeis, adam and even my PIN - I was told all were unavailable. I had no idea what BeBeMe wanted, but finally put in one of the numbers in the "range" on the lower portion of the page. I entered 8001 and was told it is available ... for $2,800! What?! I don't get what is going on with BeBeMe. This isn't so much of a rant as it is a plea for someone to please explain what BeBeMe is all about and what service it actually provides. Check it out for yourself at BeBeMe.com.