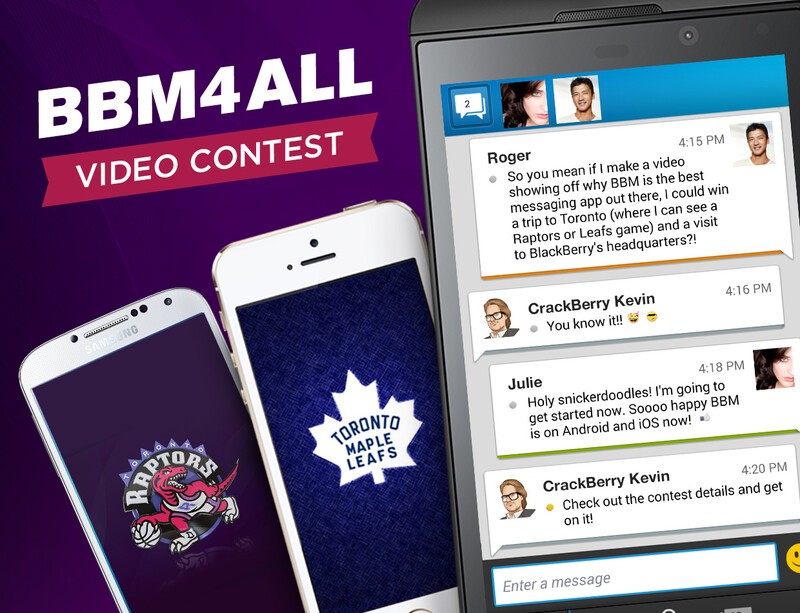 It's been a few weeks now since BBM went cross-platform and things have really taken off. It's added over 20 million users from Android and iOS and is still going strong. One thing we haven't seen too much of however is some great marketing ... that's where you come in.

Here's your chance to show your love for BBM and to help spread the word that BBM is not only the best messenger available on BlackBerry, but Android and iPhone as well.

What You Need to Do

Create a video ad showing off cross-platform BBM. You're essentially creating a TV commercial so you need to get the message across and do it well. Show BBM chats, file sharing, groups, delivery and read notifications -- whatever you want. The goal is to make people want to run to BBM.com and download BBM on their device.

You can show off the actual app, a video of your friends using BBM, a funny skit ... whatever you think will make your BBM ad reign supreme.

You can certainly do better than that, right?

Your video should be no longer than one minute and needs to show at least one of the following:

Other than that there are no constraints, so go nuts. We'll be looking at how well you get the message across, how good your video looks and how much awesome it's packing.

At the end of the entry period we'll be picking the one video that we think is the best of them all.

One grand prize winner will receive a BBM prize pack that includes:

Create your video and then send us a link to the file (Dropbox, Box, etc)  so we can download it. Submit your entries to bbmcontest(at)mobilenations.com before November 30th at midnight PT. One entry per person.

The competition will be tough as we're running this one on iMore and Android Central as well, so keep that in mind as we'll only be picking one grand prize winner.