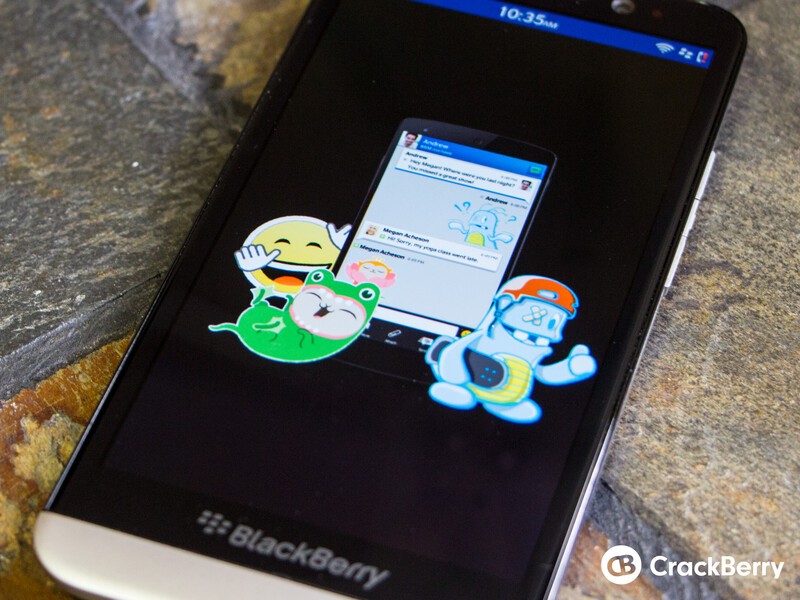 A few weeks back, BlackBerry introduced BBM Stickers in beta form. Things have been moving along and the beta was very well received, so starting next week a new version of BBM will hit all platforms (BlackBerry, iOS and Android) that will include BBM Stickers, sponsored BBM Channels and other new features. The BBM team is going full-steam ahead to keep parity on all the platforms and to keep adding new & upgraded features across the board.

BBM Stickers are essentially larger emoticons that users can share across all their BBM chats. The stickers bring a new level to BBM allowing for more fun and personality than just standard text. They are bigger and cooler than the standard emoticons and will bring BBM chats to a new level. Many other services have already implemented stickers within chats, so it's great to see that BBM is right along with them as stickers like this within IM clients are huge in some parts of the world.

At launch, the update will include the BBM Shop where users can download virtual goods that include various sticker packs — each of which will contain between 20-25 stickers. The packs will each have a specific theme, including the likes of CosCat, Bubble Bot, WWE and Shaun the Sheep for starters. BlackBerry will also offer a sticker pack based on favorite BBM emoticons. To start, the packs will be offered either for free or cost $1.99 with new sticker packs being added on a regular basis. Everything will be available to browse and download from directly within BBM.

Sponsored BBM Channels will also be making an appearance in the next release. While the term "sponsored" may scare some people, you can rest assured that the sponsored content won't ever get in your way while using BBM Channels. You'll start to see more posts and features from big brands, but you'll still get the same experience you've had all along, just with some added bonuses.

In addition to BBM Stickers, some other very welcome updates will be included with the new release. You'll now be able to send photos in multi-person chats, rather than just one-on-one. File size limits also see an increase to 16MB — up from the long standing limit of just 6MB. That means you can send higher quality images, bigger videos and larger files over BBM.

The update is scheduled to hit across all platforms sometime in the next week — so it's just days away. We'll be sure to let you know when it's live, so don't stress out about it too much :)