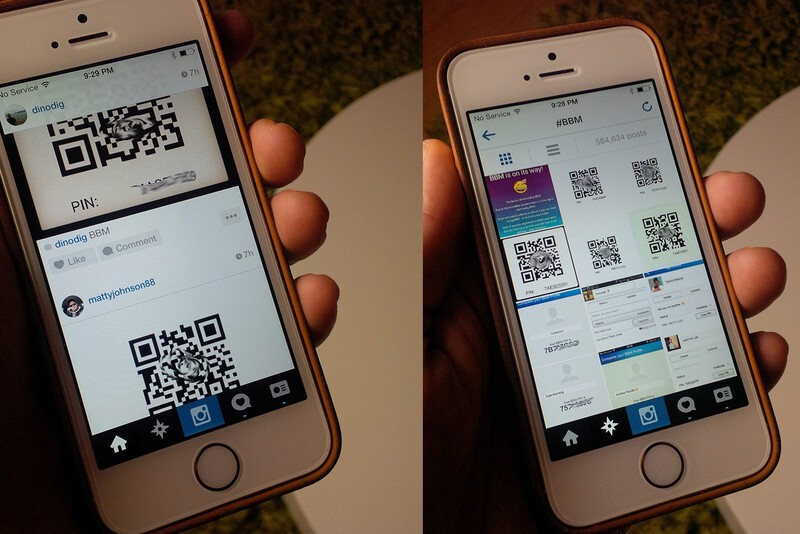 Talk about irony. Instagram is not yet officially available for BlackBerry phones, but that doesn't bother iPhone and Android owners who are now using the popular photo sharing service to now post picture of their BBM pin and barcodes to their followers.

I had no idea of the extent to which this was going on until just a few minutes ago, when while scrolling through my updates I saw two BBM barcodes posted back to back, as shown in the photo above on the left. Both dinodog and mattyjohnson88 are (non-CrackBerry) friends of mine -- just two regular guys who use phones -- so I was pretty surprised to see this behavior.

I then searched Instagram for #BBM, and was shocked to see there are nearly 600,000 results. I scrolled through the list for what felt like ever, and sure enough, the vast majority of the pins being shared start with the number 7, which is common among the BBM Pins given to iOS and Android users at this time (so these aren't people on BlackBerry phones sharing their pins). So yes, these are users who are new to BBM in the last 72 hours sharing their Pins this way. #MINDBLOWN.

It's awesome to these kind of momentum for BBM. Over 10 million downloads in the first day, and with the word being spread like this I have a feeling it may not too long to pass the 20 million mark. Let's keep it going #TEAMBBM!

Visit CrackBerry's BBM Topic Page for EVERYTHING you need to know about BBM!