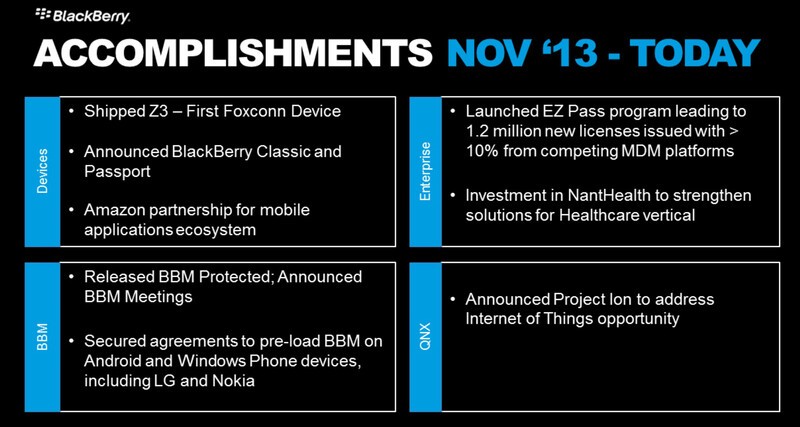 If you tuned into the BlackBerry Earnings call then you already know there was plenty of talk about BBM. If you tuned into the webcast, then you also know BlackBerry was showing slides as the call was happening. Among them was a slide called 'Accomplishments Nov 13' - Today' as shown above. If you look over it you'll easily see something called BBM Meetings and according to the slide, this is an already announced product but there has been no mention of it previously anywhere outside of the slides. Reading through the transcript of the earnings call, thanks to Seeking Alpha I noticed it was brought up again with mention it will see release in September.

Other major releases planned for FY '15 including the BBM for Windows in July. In September, we intend to release the BBM Meetings. In November we will release our BES12 and QNX cloud will come in in December.

That seems a bit weird to me. Almost as weird as BlackBerry ENTIRELY ignoring any mention of BlackBerry Blend despite having the icon for it right on the homescreen of the BlackBerry Passport and BlackBerry Classic in their announcement renders. So what is BBM Meetings? Well, we don't know but if I recall correctly there were rumors of BlackBerry working on a Skype like service. Skype has group calling. BBM has groups. Add in some BBM Video calling and maybe BBM Meetings is this rumored Skype like service. What do you all think it is? Sound off in the comments section and let us know what you think.