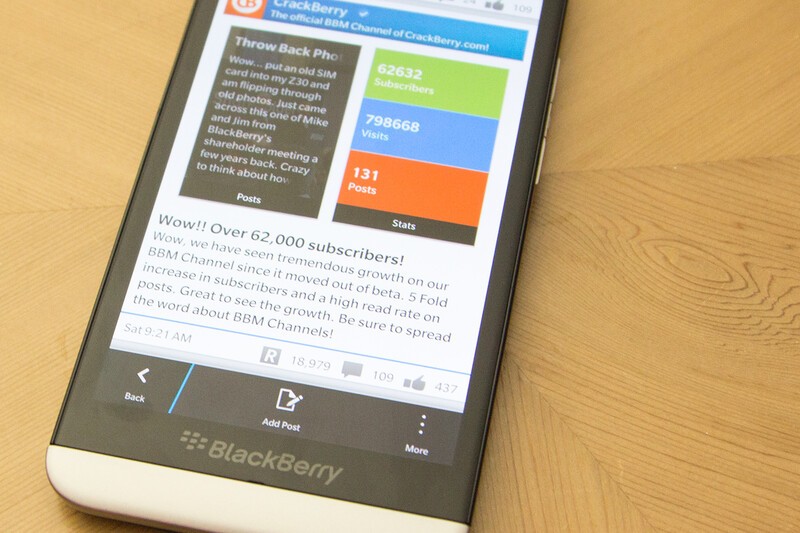 This is the post where for the first time I publicly state that I'm GENUINELY EXCITED about BBM Channels. When first unveiled at BlackBerry Live, I admit I wasn't actually all that optimistic or enthusiastic about the new BBM feature. With other social platforms like twitter, instagram, facebook, tumblr, etc. so well established, could BBM Channels really differentiate itself in features? And even if they did build out a feature set that seemed worthwhile to Channel owners, would non-BBM Channel owners (just regular BBM users) take to following channels and participating with them?

After yet again spending some quality time in BBM Channels this weekend, the evidence is beginning to appear that Channels may just have more legs that I initially thought. A lot more. When it comes to the performance metrics of CrackBerry and all our Mobile Nations sites, I'm always clued in on a daily basis to where things are at. Somehow though, I managed to neglect to pay attention to our CrackBerry BBM Channel stats the past few weeks. With BBM Channels now out of beta, we shot up in subscribers from around 11,000 to over 60,000. Amazing! Of course, CrackBerry has an established audience and brand and is tied to BlackBerry, but it was still great to see this growth in such a short time. And the views, comments, and likes on a post by post basis are really quite impressive (see image above).

There's definitely room to improve channel discovery within the app, but looking at featured channels and searching around for others, I found quite a few with decent subscriber numbers and engagement. An apps channel with over 80,000 followers. The Porsche Design channel has over 23,000 followers. And of course, my all time favorite channel - Sexy Girls in Yoga Pants - has over 1,500 followers (C000288CC). These numbers are not huge, but it is definitely still early days for BBM Channels. It's not out on iOS or Android versions of BBM yet (hopefully that's coming soon) and BBM hasn't put too much mainstream fanfare behind it yet.

I think growth will come though, and what I'm happy to see is the steady improvement in BBM Channels. There's a lot to love about the way BBM Channels works. I love that unlike other networks, there's no profile page for me where you can see everything I'm subscribed to. As in as long as I don't post comments on a channel, outside the channel owner nobody else would know that I follow Sexy Girls in Yoga Pants unless I tell them. By comparison, on Twitter I'm forced to maintain a separate account for all of the uhh.. sketchier things I like to follow that I'd rather others didn't know. And as a channel owner, I love the immediacy of the viewership stats. And I love that I can turn on "chat hours". I've done this a couple times on my personal CrackBerry Kevin channel, and it's awesome. Being able to go into a one to one conversation with your subscribers is a lot of fun. I also like the ability to report a post (comment) has been added, which has really toned down the channel spam which was a rampant problem in the beginning. There's still a bit of channel spam, but not nearly as bad it was.

So much has changed in BBM Channels that we'll follow up soon with a more up to date video walk through, but in the meantime I just wanted to spread the word to all the entrepreneurial early adopters out there that if you haven't given thought to starting a quality channel, you may want to. If you do, I think subscribers will follow. And if you put in real effort, there's a good chance your channel might get featured, in which cases a LOT of subscribers will follow.

FINALLY, I noticed in my searches that as of now there is no Sexy Guys in Yoga Shorts channel, which feels really wrong and unfair to me knowing that there is a Sexy Girls in Yoga Pants channel. So to ensure fairness and equality, I have taken it upon myself to start the first Sexy Guys in Yoga Shorts channel. The photo below gives you a little taste of what you'll find there (that's a photo of me, taken moments ago, easing into a downward dog). You can subscribe to it at C001F2412. Namaste. ;)