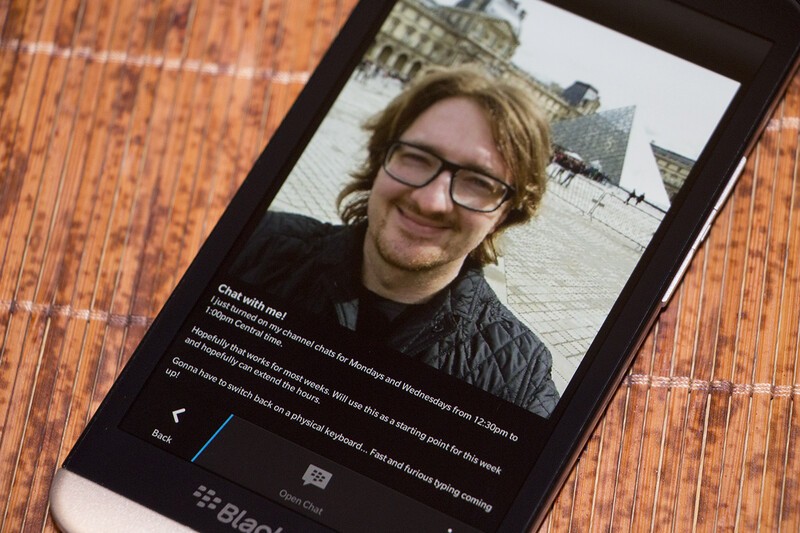 I'm starting to become a pro at BBM Channel Chats! I have now completed four regularly-scheduled BBM Channel Chats. My Channel Chat is set to turn on automatically every Monday and Wednesday at 1:30pm ET / 6:30pm GMT for thirty minutes. Last week I reminded people that the chats were going to take place, which made for a BIG turnout each session and made things CRAZY for me to manage (read my reactions to Chat session #1 and #2).

This week I didn't remind people that the BBM Channel chat was going to take place. I wanted to see how the turnout would differ. As I expected, it was much quieter — around 20 participants on Monday and ten today — which made it much more manageable from my end. I could actually chat with people vs. just say hello and goodbye as I bounced around conversations. Last week I had way more people participating, which pretty much made it into a BBM Stress Test. It was basically impossible to keep up while jumping back and forth between so many individual chats.

For the people who expressed they were bummed out that they missed the chat, it made me realize the BBM team should build in a push notification for chat sessions. So as a subscriber to a BBM Channel, you could opt in to be notified when the Channel owner turns Chat on (or even add scheduled ones to your calendar). Seems like a no brainer to add that functionality in —unless it's there already and I'm just somehow not seeing it?!

After this week's Channel Chats, it's becoming really apparent to me that the BBM team has some work to do in making BBM Channel Chats make sense to users. Every other person I chat with is sort of shocked at first to realize they're having a one-on-one chat with me. Everybody has the impression that it's going to be some sort of a group chat, or live-blog with commentary sort of thing (where they'll see all of my chats and other peoples responses in a flow).

In reality, it's really just like a normal BBM chat you'd have with your existing contacts, except in this case you're having it with a person who doesn't have you on their contact list, and the functionality has been stripped down. You can chat, but you can't do the things you can with a regular contact, like send photos or use stickers or send voice notes, etc.

A few people I chatted with in the last two weeks, when realizing that BBM Channel Chat was a 1:1 chat vs. a group thing, asked me how this was different than just chatting with me via twitter

Reflecting on this, I did a little test tonight to compare conducting a Channel Chat with a lot of participants (as I encountered last week) vs. using twitter to engage with a bunch of followers at once (essentially creating a twitter equivalent of a Channel Chat). With a Channel Chat, the user (not the Channel owner) initiates the conversation with the Channel owner. The chats can be about anything the user wants to ask (which is cool). And ultimately, the chat session can come to an end, which is good for the Channel owner. When it comes to social services like twitter and you start talking to a lot of people at once, there's no end - you could continue the conversations around the clock 24 / 7 / 365 if you wanted to.

For my twitter test tonight, I sent out a tweet that I knew would get a lot of responses immediately:

So what make / model of phone is everybody rocking these days? And… what color?!

And get a lot of responses it did receive. With twitter, unlike BBM Channels, everybody can see the train of responses. Check out THIS TWITTER THREAD for the stream of replies and replies to replies that followed (and are still happening even as I write this).

In this case, me as the twitter equivalent to the BBM Channel Owner set the tone for the conversation. In other words, I asked my followers a question. And because I initiated the question, I then stuck around to answer all of the replies that followed (to me it was the same commitment as scheduling a 30 minute BBM Channel Chat). Using TweetDeck on my desktop computer actually made it very easy to manage the incoming stream of replies, vs. a BBM Channel Chat where I need to jump in and out of each conversation with each contact to keep it going.

Of course, on twitter, there are no hours. You can tweet at me anytime you want. I may reply, or I may not (I try and do my best but am not a hyper-twitter user). With a BBM Channel Chat, you only have access when I allow it - which means the chance of response is high.

Do you feel the intimacy?!

One of the marketing messages behind BBM Channel Chats is that it allows for channel owners to engage in intimate conversations with their fans. What I'm curious about is if as a participant in a BBM Channel Chat, are you feeling this intimacy is above and beyond what you would experience on a different social service like twitter or G+? Does the fact that there are set hours and a high expectation of getting a response make it more compelling than just pinging me anytime on a service like twitter and maybe getting a response?

Be sure to let me know in the comments. I'm finding the concept of BBM Channel Chats to be really interesting, hence the slightly chaotic and disjointed articles following my Chats. Think of them as my BBM Channel Diary. I'm sure there will be more of these posts as I continue to conduct my regular chats and observe and ponder! :)

Join me for a BBM Channel Chat!

If you're not already subscribed to my channel, you can search for CrackBerry Kevin in BBM channels and find it that way, or add C00010BC5 or scan the barcode below. And if you're reading this and have yet to use BBM Channels, be sure to check out our guide on How To Use BBM Channels.

NOTE: Next week I'm going to be on a plane ride during my regularly-scheduled Monday chat, so that one will be cancelled.