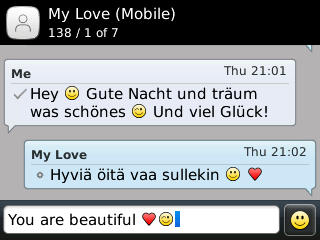 For some it is boon, for others bane. But for all I know, BBM is not only a major selling point of BlackBerry smartphones, but for some people it is the sole reason to buy one in the first place! Whether just socializing, sharing intimate moments or having fun with friends, BBM can both be a powerful communications tool or the very opposite of a carefree, merry experience. In a recent study conducted across various Middle Eastern countries about BBM and its effects on family relations, a theme of disappointment was found among individuals who had hoped for better. One of them was Nadin Akbar, a Saudi graphic designer. She realized that BBM had a devastating impact on her romance.

I thought that BlackBerry Messenger could keep me close to my fiancé all day long, making our relationship stronger. Later I discovered that this was not true, because text messages and chatting are completely unanimated. It became hard to understand my fiancé, as these means of communication don’t show facial expressions and vocal tone. He also became tired of contacting me through BBM. Whenever we met, he spent most of the time texting to his friends and work colleagues. He told me that texting every single minute diminished his interest to call or meet me.


Sounds familiar? As with all kinds of text-based communication such as SMS, Instant Messaging (IM) and to a lesser extent email, there is a great risk that the emotional part of our messages is left out, leaving us with a flat, lackluster stack of words to work with. And BBM just happens to be something that many of us use on a regular basis, but even the literally gifted can't overcome textual limitations so I ask you, CrackBerry Nation, what kind of experience have YOU had with BBM? Is it all sweet and sugar or perhaps a heartbreaking melancholy? Share whatever you have in mind – the floor is yours :-)
They say it's for science