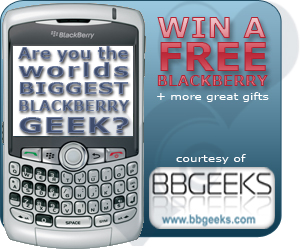 Our friends at BBGeeks have been pretty good to ole CrackBerry.com since they launched a few months back - letting their readers know whats going on at CrackBerry with our promotions and free galleries and forums and such. It's only fair that we return the favor and announce the promo they're running in which you can win yourself a New BlackBerry, a year of hosted email, and a free license for JiveTalk.

Getting in on your chance to win will take some effort, but could be a lot of fun too. They're looking for video entries (or text if you're too shy to be on camera... but that's boring, so do video) letting the world know why you're the biggest BlackBerry Geek. For all the details, click the image in this post.

I'm thinking I have a good shot of winning if I enter - leaving a solid career path in finance/biz dev/management to run a website dedicated to my BlackBerry Addiction must qualify me as a geek... or maybe an idiot (I'm pretty sure my girlfriend thinks I am both!). :-)