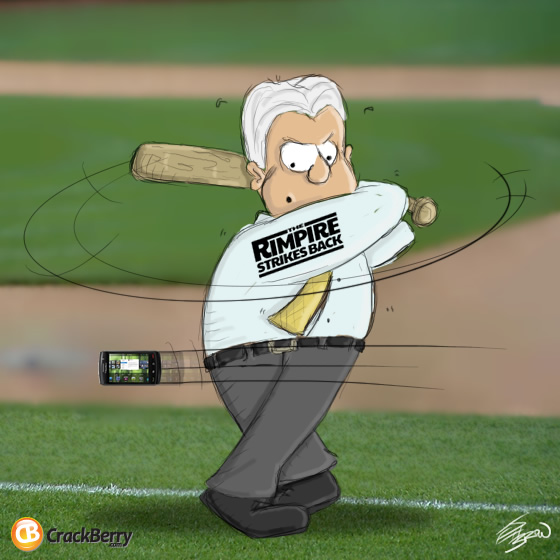 Sitting down to live blog the BlackBerry DevCon keynote this week, my hopes were high that we'd see the RIMPIRE walk up to the plate and smack a homerun, knocking a QNX-based BlackBerry SuperPhone out of Moscone park.

That didn't happen. Instead, we saw RIM's Founder and Co-CEO Mike Lazaridis take a couple swings, hit a foul ball with a confusing BBX announcement, and ultimately strike out in delivering a QNX phone announcement. The press box was full and all eyes were on the RIMPIRE to deliver... it was definitely an opportunity missed.

Of course that's not to say there were no QNX phones at DevCon. I'd bet my free PlayBook that a few were on hand, being shown off to valuable partners by high ranking RIM execs. We know these phones exist.

Honestly, if the first BBX BlackBerry isn't ready for primetime yet, I'm glad RIM didn't show it off. With so much going on this past Tuesday in the mobile world (Apple missing out on earnings, Google/Samsung announcement), I think the lack of announcement from RIM went fairly under the radar, and an actual phone announcement may not of received the attention it would have rightly deserved.

The RIMPIRE's next at bat comes this January at CES in Las Vegas. I'll be there, and this time I'm expecting a big hit. Two strike outs in a row is not acceptable when you're trying to win the game.

Look for more Doodles on all of our Mobile Nations sites soon too! Have a great idea for a BBDoodle? Send an email to [email protected] and Jason'll take a gander.