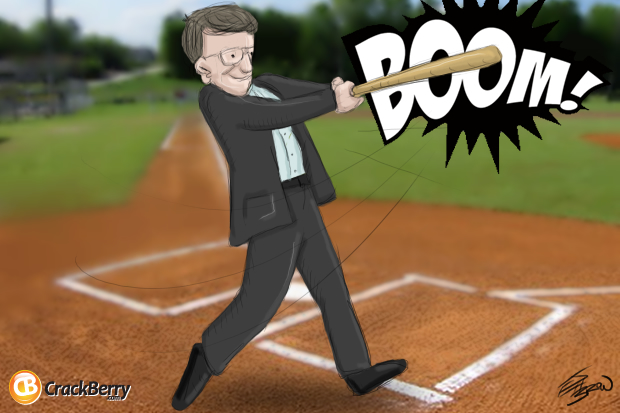 Following BlackBerry DevCon 2011, we posted a BBDoodle to the blogs here with the title The RIMPIRE Strikes Out. I took a lot of heat over that post (oh Kevin, you've turned your back on BlackBerry, etc. etc), but it was true. Between the complete lack of announcements and the performance of RIM's then CEO Mike Lazaridis during the keynote, the event definitely was an opportunity lost.

BlackBerry World 2012 was really the first at bat for RIM's new CEO Thorsten Heins (we'll call DevCon Europe a warm up), and as we talked about all week, he really nailed it out of the park with his performance. Yes, we know the BlackBerry 10 preview was brief, and some of you may be feeling like for a home run RIM would have needed to show more. Coming into BlackBerry World, I honestly didn't think RIM would show us any BlackBerry 10 preview at all. Knowing that the first phone wouldn't be released until later this year, it would be silly for them to blow their wad now (as Heins' said.. they have to keep some secrets).

At BBWorld, Heins delivered a solid keynote, renewed RIM's connection to the media and as mentioned in our article Five Important Observations from BlackBerry World, we saw that this is a new RIM. Not bad for only having the job for three months.

Yes, we know Wall Street's immediate reactions to BBWorld would have the RIMPIRE taking a swing and a miss, but on our scoreboard RIM's new CEO definitely scored a point this week with his performance. And there's still a lot of innings left.