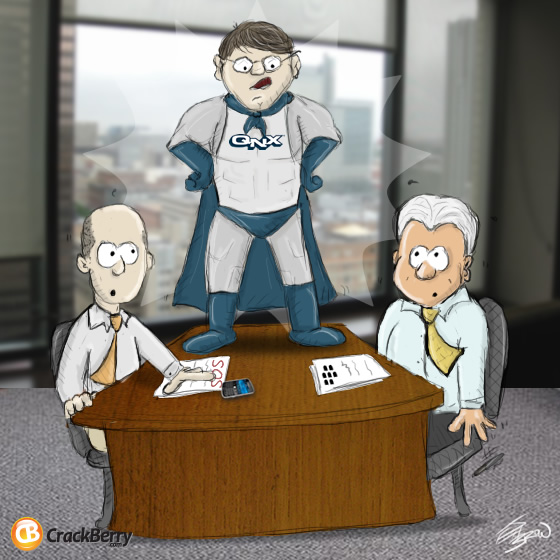 We're starting a new regular feature here at CrackBerry to give you a little extra smile each week: the BBDoodle from Jason Harrison, founder of BrowCo.com, whose work you may have seen before in the form of PreDoodles on PreCentral.net. Look for more Doodles on all of our Mobile Nations sites soon too! Have a great idea for a BBDoodle? Send an email to [email protected]obilenations.com and Jason'll take a gander.

In celebrating the one year anniversary of the BlackBerry PlayBook last week, I re-watched the video of the live announcement from BlackBerry DevCon 2010. Research In Motion founder and Co-CEO Mike Lazaridis unveils the BlackBerry PlayBook, makes his way through some power point slides highlighting the hardware and features, and from there invites to the stage "the founder of QNX and inventor of the BlackBerry Tablet OS, Dan Dodge." From there Dan -- or Super Dan as I like to call him -- excitedly walks through the Power of QNX.

RIM's Co-CEOs Jim Balsillie and Mike Lazaridis have talked often of the technical transition the company is working through as they make the leap from the traditional BlackBerry OS to the new QNX-based platform. On that PlayBook announcement day and the year since, as an outsider to the company I sometimes get the impression that it's Super Dan and the QNX team coming to the rescue of BlackBerry. And while I have no doubt that QNX is playing a massive role in this transition, I think this BBDoodle serves as an important message to RIM. As big a role as Dan and the QNX team are playing right now, it's important that all of RIM get on the same page and play on the same team as the company makes the jump into the next era of BlackBerry dominance.

In the last couple of months we've seen RIM announce lay offs, re-structuring and we've seen a lot of important people leave the company in pursuit of other opportunities. It's clear there's a bit of chaos going on behind the scenes. RIM has a lot of moving parts, and the potential is HUGE assuming all teams are functionion properly and working together properly. It won't be QNX that saves RIM, but RIM that saves RIM, with QNX as a component of it.

I'm sure we'll see Super Dan appear in more BBDoodles... here to save the BlackBerry day with QNX Power!