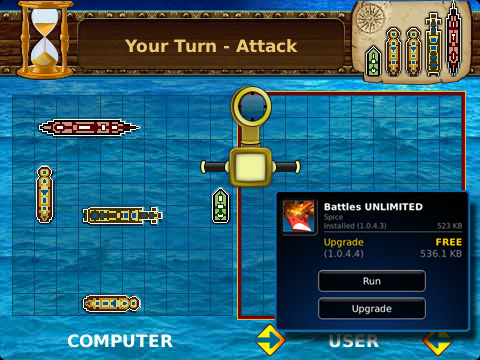 I'm a big fan of Spice Labs and their highly addicting games and puzzles. Growing up, BattleShip was my favorite game to play with my Dad. Being able to play it on my Bold brought back so many happy memories. Since I switched to the Torch, I've been missing my daily fix. I'm happy to say that the last few updates have not only improved game play but added support for OS 6 devices as well (excluding the Style).

As much as I loved playing the original, the one thing it lacked was competing against a human opponent. Sometimes the computer seemed to win a little too much; don't you think? Well have no fear because one now you have the option to play against other humans over the internet using WiFi or your data plan to connect to their servers.  You can also play against the computer or with your friends by sharing your device. It even offers the ability to chat with your opponent in multi player mode. How cool is that?

I must say Spice Labs' graphics are some of the best I've seen for BlackBerry applications. This new interface doesn't disappoint. In the earlier version the grid could be difficult to see and was rather plain. Now the colors seem to jump right out at you. Also, the ships are more intricately drawn and you even have a navigation tool to fire with. All in all I say this is a pretty sweet update to a popular free game.

As a warning, if you already have the original version, installing the upgrade will add the app again onto your device.  It's because of the name change. If you prefer not to have both versions installed just remove the other one first.

Battles UNLIMITED is available for free from BlackBerry App World for most devices running OS 4.2 and higher including support for the Bold, the Storm/Storm2, and the Torch. Download and play your favorite childhood board game today.