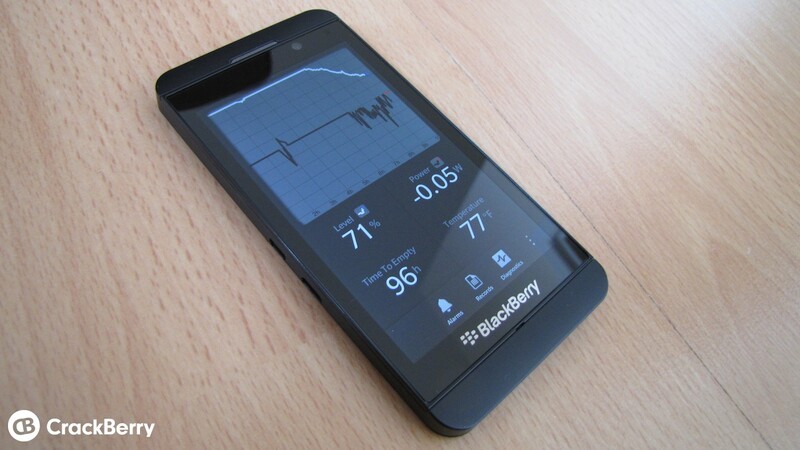 Ever since I started using a BlackBerry I have always wanted quick and easy access to see how my battery is performing. There are a few apps in BlackBerry World that will instantly show you your current battery percentage, however I recently stumbled across Battery Guru for BlackBerry 10 and I absolutely love it!

Battery Guru is also available for the BlackBerry PlayBook but since I don't use the tablet as much now that I have my Z10 it's the phone app I will focus on. So, rather than just just presenting you with the current battery percentage left - Battery Guru gives you a whole bunch of other information - most importantly for me being able to view the discharge rate on a graph. It's not an obsession of mine - I just like to know how things are performing, honest!

Battery Guru has a great Active Frame too so if the app is running you can just peek at your home screen to view the battery level as well as a few other bits of info. I love this feature and nice Active Frames really are a deal breaker for me.

So, jumping into the app you are presented with a graph covering the top half of the screen. You can scroll this to the right to view your performance over the last few days which is a nice touch. Under the graph are four icons. These are battery level, power, time to empty and current temperature. Give them a flick to the left and you get another couple - voltage and current.

Down at the base of the display are three tabs. The first of these is alarms where you can set the app to notify you when your BlackBerry has reached a certain level whilst on charge or more importantly when the battery is getting low.

One further thing worth mentioning is temperature units. These are determined by the system's Metric/Imperial setting, but the developer has indicated he'll be adding an in-app setting for the temperature units in the next release - good stuff.

If you want to keep an eye on how your Blackberry 10 battery is performing you NEED this app. And priced at £1.50/$1.99 it offers great value for money. What are you waiting for - download it now!