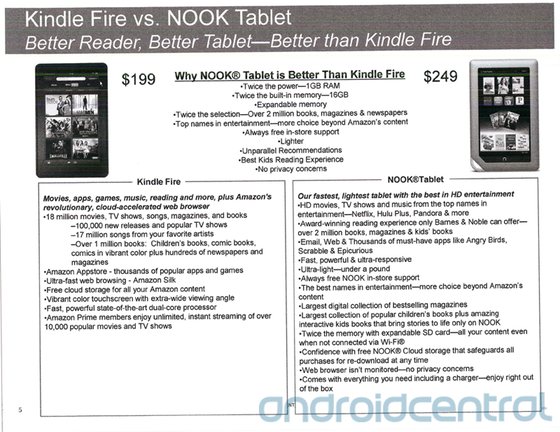 Looks as though the push for the BlackBerry PlayBook may have taken another hit. The folks over at Android central have come across the details surrounding the new Barnes & Noble Nook Tablet and well -- it's no longer just and e-reader.

This time around, Barnes & Noble has taken on full tablet status with with HD movies, TV shows and music, all thanks to the likes of Netflix, Hulu Plus and Pandora and it's highly customized presumed to be -- Android core although it never the details never mention that. While Barnes & Noble has compared it to that of the Kindle Fire, the specs appear to be in line with that of the BlackBerry PlayBook as well

Plus, you know -- Barnes & Noble's strategic marketing and reputation behind it. The original NOOK and NOOK Color did exceptionally well for Barnes & Noble. This version, will be announced on Monday with shipped units arring in stores come November 16th. While it's too early to tell what the reaction of users will be when unveiled, it's certainly another shot across the PlayBook's bow.

All I can say is, I hope RIM has a lot of people working on BBX to get as many things in line as possible because as of right now -- everyone is looking to take whatever pieces of the tablet pie they can and RIM thus far, isn't eating very well.