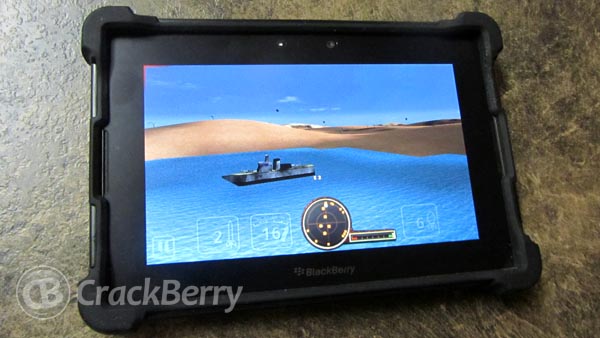 Do you like the sound of a game that includes helium and high velocity projectiles? Balloon Gunner 3D for the BlackBerry PlayBook offers that and more in this high flying adventure. LanguageBug, the developer, states that the game has a bit of a steampunk feel to it. For over 40 levels you pit your balloon, and armaments, against planes, turrets, airships and more. Your arsenal includes rapid firing cannons with unlimited ammo as well as missiles, bombs and speed boosts that are available in limited quantities (and only on select levels as well).

The controls are dead simple with Balloon Gunner 3D; all you have to do is tilt your PlayBook into position and tap to shoot. The 3D imaging, or stereoscopy, can only be enjoyed if you wear a pair of Red-Cyan 3D glasses. In the options menu, the 3D depth can be increased anywhere between a factor of 1 and 10. I didn’t have your standard 3D glasses available so I actually resorted to borrowing my son's 3D goggles that came with his ‘Slip ‘n Slide’ type toy. Regardless, they worked. Keep in mind that the true colours used in the game are lost, as this 3D method doesn’t provide full colour viewing like ColorCode 3D does. So not only does the 3D depth but a level of difficulty. Don’t worry, you can always enjoy full colour, glasses-free, gameplay with a 3D Depth of 1.

Once you find a control sensitivity level that suits you, you’ll be blasting holes in the enemy balloons in no time. You can grab Balloon Gunner 3D for $0.99 from BlackBerry App World.