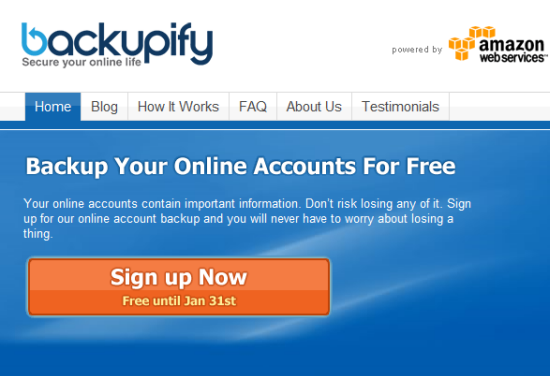 My personal email account is managed through Gmail it works well and it's free. Truthfully I don't stay up at night worrying that Google is going to come crashing down one day and I'm going to lose my data, but if there was a free automated independent service why not put it to work? Enter Backupify; they are powered by Amazon S3 so it's reliable. Backupify offers free automated storage for multiple accounts: Flickr, Twitter, Hotmail, Gmail, Google Calendar, Google Address Book and Facebook.

I first learned of this service when I was looking to close my Facebook account and wanted an easy way to get my data out of that privacy nightmare. After a few quick clicks I had a Backupify account and a couple clicks later it was backing up Facebook, every 7 days automatically. When the weekly backups are complete I receive a status update email reporting that the backup was successful.

Next I decided to backup Twitter, why not? Twitter doesn't keep my messages forever so I a digital record of all my random thoughts I've shouted to the world. I really like twitter for this, it reminds me of a soapbox on speaker's corner.

Recently I began thinking about my email and realized I wasn't applying the same precautions that I've been applying to the rest of my computer life. That is having at least two independent copies of everything. All of my PC's backup to my Windows Home Server and that backs up to Carbonite as well my photos backup to Google Picasa Web. My Gmail however is only at Google.

My BlackBerry lives and dies with Gmail, it's my lifeline and I have no backup of it. OK back to Backupify I go and literally a couple clicks later and I'm backup it all up.  The free version allows one backup account per service and 2GB of online backup storage. If you require more than one Gmail account or 2GB of storage up will need to look at a paid premium package.

As for me I've got everything ticking along quite nicely and can continue sleeping well at night with the knowledge that my mail is stored in more than one place. Some may claim I'm a little OCD and I would not necessarily disagree with that assessment, however it's free and I don't have to do anything.