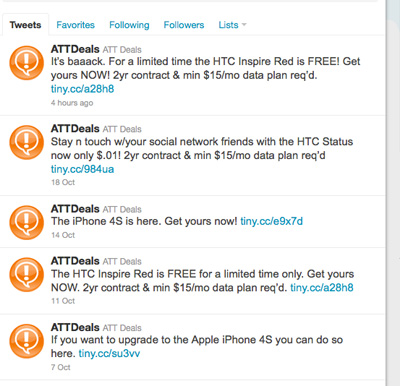 This is odd. On October 21st @ATTDeals tweeted out that the BlackBerry Bold 9900 is coming soon. Stay Tuned!. We reported it on Sunday, October 23rd. Now today CrackBerry member igotberryfever noticed that the Bold 9900 tweet has been removed from the @ATTDeals twitter account. What's up with that?! Whatever it is... it doesn't seem positive.

In other related news, I heard from a source the other day who I haven't heard from in years (literally since the original Bold 9000 was delayed on AT&T and he kept me the loop) who provided some insight into the Bold 9900 on AT&T delays stating that RIM's NFC implementation is a sticking point to be blamed on the phone not yet being released...

One of the major reasons for the 9900 being delayed on AT&T is an ongoing debate between RIM and AT&T around the NFC implementation on the device. In the NFC world, the key component is the Secure Element (SE) and it holds the secure credentials (for e.g. the credit card number in case of NFC payments). The Issuer Security Domain controls the access to SE in terms of writing on to it. RIM is promoting a concept where they would hold the ISD, so RIM can roll out customized NFC services while AT&T wants ISD control on the devices that they roll out (this is in relation to the larger ISIS NFC payment project that they are a part of). I don't believe a satisfactory decision has been arrived at between the two parties and discussions are still ongoing at a very high level. AT&T wants to have a grip on NFC because they have some unique NFC projects in the pipeline. Verizon & TMO are taking a "wait and watch" approach on NFC and that's why they are good with RIM doing their thing.

If NFC is at the crux of the delays of AT&T releasing the Bold 9900, all I can say is THAT SUCKS. Considering NFC adoption is really next to nothing at the present, either AT&T should just suck it up to make us BlackBerry fans happy with new 9900s, or RIM should kill it on AT&T Bold 9900s somehow (toss on a non-NFC battery door, disable in software, etc.). I think a lot of AT&T subscribers out there would gladly give up the NFC on the 9900. They just want that keyboard! Of course, there could be a lot more to this story still... so keep it locked to CrackBerry for the latest.