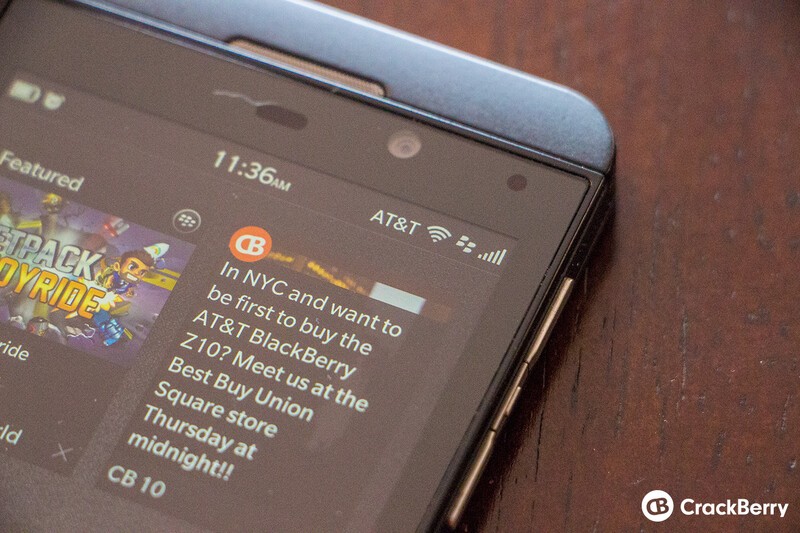 AT&T is stepping things up for potential BlackBerry Z10 buyers. Thanks to their new trade-in program, if you trade in your current smartphone you can receive at least $100 off a number of new devices including the BlackBerry Z10.

Most devices will net you $100 credit for a new phone, while some newer models can get you even more. So that means if you trade in your current smartphone you can grab a new Z10 for just $99 (down from the $199 retail tag) or less depending on what you're trading in.

So if you've yet to purchase a new Z10, now may be the time to get on it. We know many of you are still holding out for the Q10 to arrive, but there's no telling if the offer will still be valid come launch day.

DALLAS, April 30, 2013 /PRNewswire/ -- Beginning May 1, consumers who trade in their current smartphone to AT&T* will be eligible to receive at least $100 off the purchase of a new smartphone, including the new Samsung Galaxy® S 4, BlackBerry® Z10 or 32 GB HTC One®.  These devices are normally $199.99 with a qualifying two-year agreement** but, with this limited time promotion, they will be available for $99.99.

This promotion applies to any smartphone AT&T sells, and gives customers access to the latest devices at a fraction of the cost or, in the case of smartphones priced under $99.99**, for free.  To take advantage of this offer, customers are encouraged to visit any AT&T company-owned retail store or participating authorized dealer with their previous smartphone that is no more than three years old and in good, working condition.  In stores, upon trading in their old phone, customers will receive the $100 credit on-the-spot and can use it immediately. ***

Some trade-in phones may have a value higher than $100.  In this case, customers will receive the credit at the higher value.

"This offer is a great opportunity for AT&T customers to get their hands on the newest smartphones in our portfolio at an outstanding price," said Eric Goldfeld, AVP- marketing management, AT&T.  "With graduation and Mother's Day coming up, people can take advantage of this promotion to surprise someone – or even treat themselves – to one of our hottest smartphones.  The best part is that you'll receive credit for your old phone instantly on-the-spot in AT&T stores."

In AT&T company-owned retail stores, AT&T's Trade-In Program lets customers turn in old wireless phones and receive an AT&T promotional card reflective of the device's trade-in value and condition. Customers can use the card to offset the cost of some of the latest wireless devices or the purchase of other AT&T products and services.***  All devices, including tablets data cards and feature phones – regardless of manufacturer or date purchased – will be considered for trade-in.

Beyond seeing a little more green in their pocket, AT&T customers that use our trade in program are also doing their part to support the company's sustainability initiatives. In 2012 AT&T customers recycled more that 3.1 million phones and broke the world record for cell phones recycled in a one-week period as certified by Guinness World Records.

Switching to a new smartphone has never been easier with AT&T Mobile Transfer, an app that syncs contacts, photos and videos from your old phone to your new phone.  Just visit www.att.com/mobiletransfer to make sure both phones are compatible, download the app and follow the instructions to transfer.

Likewise, setting up your new smartphone is a snap with AT&T Ready2Go, a free service that helps you to easily set up and personalize your device in minutes from the comfort of your personal computer. With Ready2Go, it's easy to set up your email accounts, import your contacts, connect to your social networks and more.