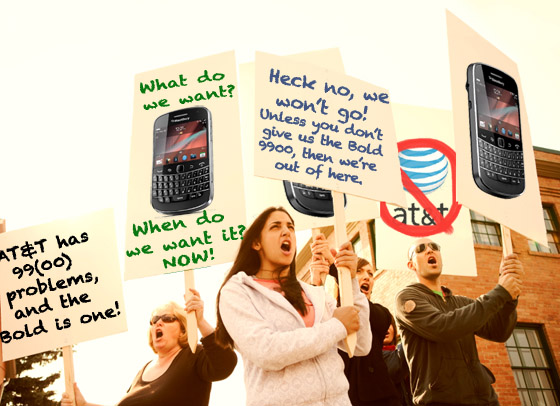 * November 1st Update:  AT&T has OFFICIALLY ANNOUNCED the pricing and release date of the BlackBerry Bold 9900.  You'll be able to get it starting November 6th, for $199.99 on a 2 year contract. *

I've noticed a lot of readers dropping off-topic comments on CrackBerry posts this week asking for an update on the release date of the BlackBerry Bold 9900 from AT&T, so here it is....

Disclaimer: The **best** info I have right now hasn't come in from trusted personal sources, but rather from tips on the good 'ole CrackBerry tip line. I've had a few different people send in similar info over the past ten days. When that happens it's often a good sign of the info being legit (store owners, etc. getting the same info), but since it's not something I have concrete evidence on yet nor is coming from what I consider one of my personal trusted sources, just take it as me passing on the tip line info I have right now to you, to keep you in the loop. And often after making a post like this we'll see a lot more feedback come in saying whether we got it right or wrong, so stay tuned for that. So don't get too excited yet. But at least it's better than nothing.

So with that disclaimer in mind, the best word I have as of now is that it's looking like Sunday, November 6th is the day that both the BlackBerry Bold 9900 and BlackBerry Torch 9860 could become available to consumers. Based on some of the cost info that was sent in as well, on the pricing front it points to the Bold 9900 selling for $199 and the Torch 9860 going for $99 on a standard 2-year contract. Again, don't take this as solid news yet, but I hope it does pan out to be true. November 6th isn't too far away!

And if you go back three years in BlackBerry history, it was actually October 21st, 2008 when AT&T finally announced the BlackBerry Bold 9000 and it was November 4th when it became available to customers. In that case also, other carriers had the 9000 available since August. So maybe, just maybe we'll see history repeat itself here... give or take a few days. If you haven't signed our AT&T BlackBerry Bold 9900 petition yet, do that now, and keep it locked to CrackBerry for more updates as we have them on the Bold 9900 from AT&T!