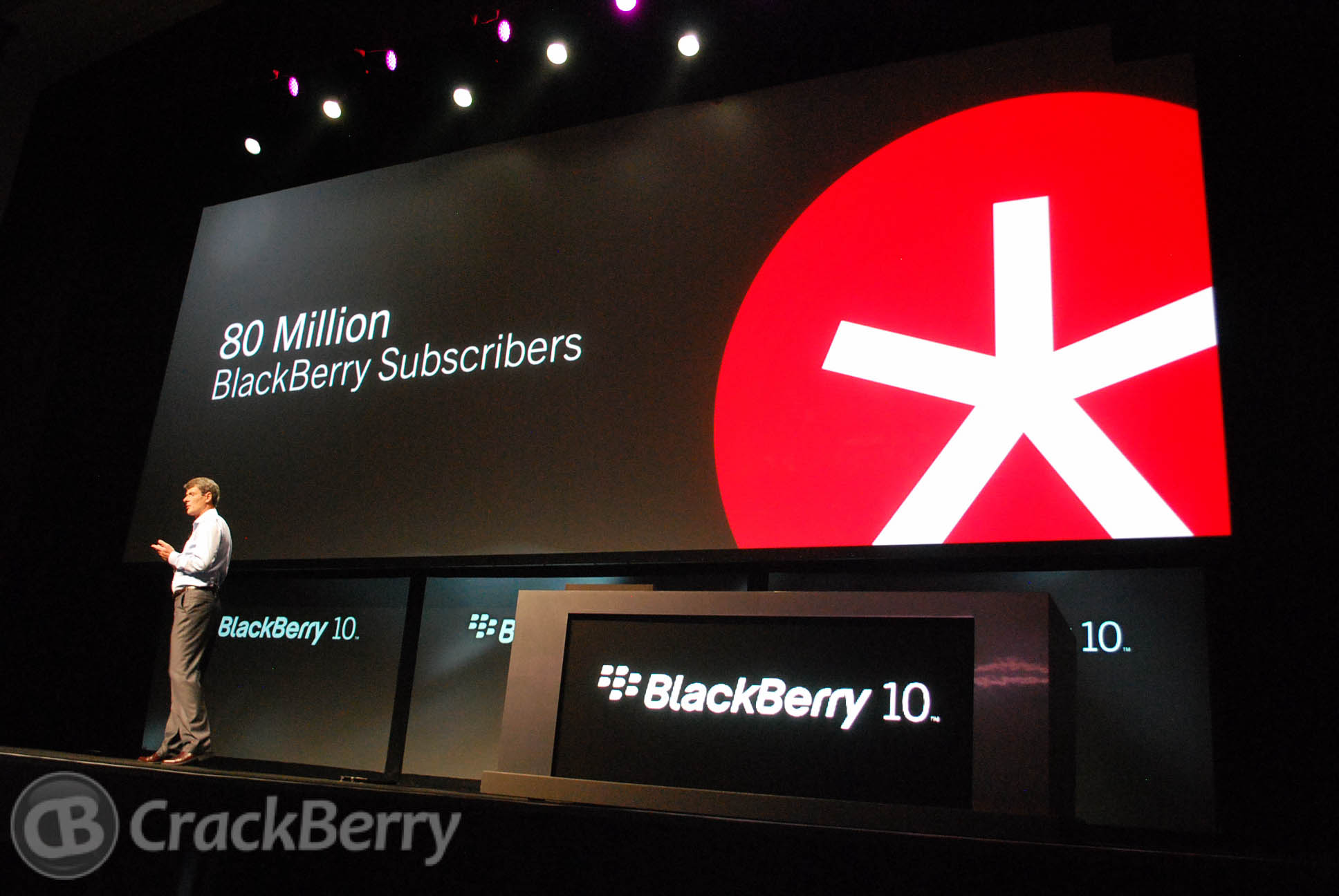 This year is a first for me. I've attended every single BlackBerry developer's conference, held annually in California, since DevCon started several years ago. But not this year. I ran into a schedule conflict and had to make a decision. So here I am, back at home, catching up on the keynote videos and reading everything I can to understand stakeholder reactions to the show.

It's an interesting week, that's for sure. The stock hit yet another low on the back of the iPhone 5 release, which happened to coincide with an ill-timed BIS quality of service issue (it wasn't an "outage" - all data got through just fine... things we're just delayed for a bit). This all happened ahead of the BlackBerry Jam keynote, which is now over. And following this we'll soon see RIM announce quarterly results in just a few hours.

The most important financially-related information came on Tuesday during Thorsten Heins' portion of the keynote. He revealed that RIM now has 80 million BlackBerry subscribers. This surprised the investment community, who (on average) expected the user base to decline from the 78 million subscriber base last quarter. So despite RIM's numerous delays with launching BlackBerry 10, and well known loss of market share in the US market, they're actually still seeing growth.

Think about it. 2 million new subscribers per quarter is over 10% annual growth. Not too shabby for a company who isn't currently competing at the high end of the market. It clearly shows that customers in emerging markets are still actively buying BlackBerry handhelds. This is very encouraging, and I think it gives RIM a better chance at global recovery when BlackBerry 10 launches in a few months.

Other than this, the keynote itself is being viewed as a bust to Wall Street. That's because investors don't really understand developers, and don't care for all of the SDK and UI demos that RIM showed off. Psychologically, these come off as "catch up" events to the market and don't impress anyone. But they do matter. They are required for RIM to regain market share in 2013. Ignore anyone who tells you that RIM hasn't stepped up its game. They're clueless. It's sad, but true.

It's also important to keep in mind that the number of people who will complain in public far outweighs the number of people who will give public kudos to a company. Just look at the Twitter and blogosphere response to RIM's developer appreciation video, featuring an REO Speedwagon parody. It's almost insane to witness just how many people are complaining about this hilarious video, either believing it to be an "official" marketing campaign or not realizing that RIM has done this before (Orlando in May - the infamous Tom Petty parody, which was never posted to YouTube). RIM is taking its recover seriously, but not letting that get in the way of having some fun while they're at it.

I'm quite happy with what I'm seeing, but I will lay out a caveat. RIM better not be exaggerating. For example, during the keynote Marty Mallick said (paraphrasing) that all of the big names we'd expect in App World will be there at launch. If they're going to say something this strong, they better not launch without apps like Netflix and Skype. How can we take them seriously otherwise?

BlackBerry Peak, Flow, and Hub look fantastic. The SDK improvements (including Cascades) look powerful. HTML5 performance looks great as does the BlackBerry 10 web browser. Developer support is improving, and the BlackBerry $10,000 revenue guarantee is certainly drawing even more developers to the platform. The timing of BlackBerry 10 release looks much more certain. Everything is going in the right direction. They've come very far in the last 12 months, despite not actually launching the product yet.

We still have to get through at least another couple of horrible sets of financial results. Today will be the next set of bad numbers. But the good news is that the future of the company has nothing to do with the numbers they'll be reporting. I think the most important number will be the company's cash balance. Last quarter they had a kitty of $2.2 billion. If they can hold this steady, the market might cut them a bit of slack.

We'll find out. I'm tied up today and Adam and Bla1ze are on their flights home from BBJAM, but Kevin will be firing up the press release as soon as it hits as well as a live blog for the community to chat during the Earnings Webcast. We'll follow up with more analysis and a full out CrackBerry podcast soon.