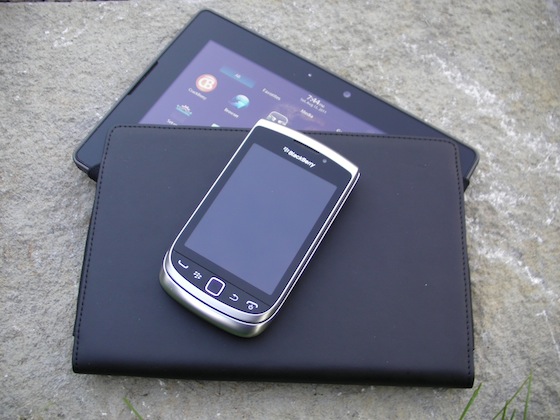 One thing that has always bothered me about the BlackBerry PlayBook and more so BlackBerry Bridge is the fact that when using BlackBerry Bridge, none of your apps actually make use of the data connection. You can't download apps from App World, you can't send a tweet off using Blaq and you can't use the browser -- unless tethered. Today though, with the new BlackBerry PlayBook OS update to v1.0.7.2942, something has changed. Third party apps such as Blaq, Poynt, Facebook even our very own CrackBerry PlayBook app -- all now work while bridged to your BlackBerry. Some apps are slower then others but, they do indeed work. One app that doesn't work however, is BlackBerry App World, but could this be a sign of it coming later? Could be, but it could also be a mistake within the OS as well.

Whatever the case may be, we certainly hope it stays and RIM actually improves upon this method of connectivity. Realistically, this makes more sense then "tethering" your BlackBerry using your carriers APN's and having them charge extra for it. Have you tried some apps? Cut off your WiFi, try Bridge and let us know which are or are not working. Sadly, it still appears AT&T is blocking the function but if you found a workaround, feel free to share that as well.