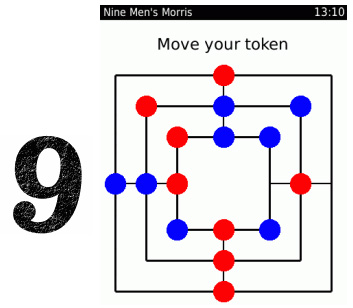 When it comes to gaming and BlackBerry, I prefer using my BlackBerry PlayBook to kill some time. The only exception to this is when a game sports BlackBerry Messenger integration. I want to have that connectivity, the knowledge that I’m owning someone I know. First we chat through BBM and then I’m beating you into submission! It doesn’t matter how detailed the game is, it just has to be both fun and addicting. Both can be said about the BlackBerry smartphone game 9 Men’s Morris. This is a strategy board game that you can challenge your BBM friends. The game gives each player nine pieces that they would move around the 24 spots on the board. Once all of the pieces are placed on the board, players then take turns moving them around until they are able to place three in a row; thereby creating a Mil. With the creation of a Mill, you then can remove an opponent’s piece from the board. In a nutshell, you win by leaving your opponent with no legal moves or less than three pieces.

The graphics are simplistic, but as I said before, it is about the game play. 9 Men’s Morris is again addictive and much more entertaining than Checkers or Tic Tac Toe. The developer, Ebscer, is known for offering games of this type, including the popular Xploding Boxes and Pixelated. If you want to try out 9 Men’s Morris with your BBM friends, you can grab it for free from BlackBerry App World.