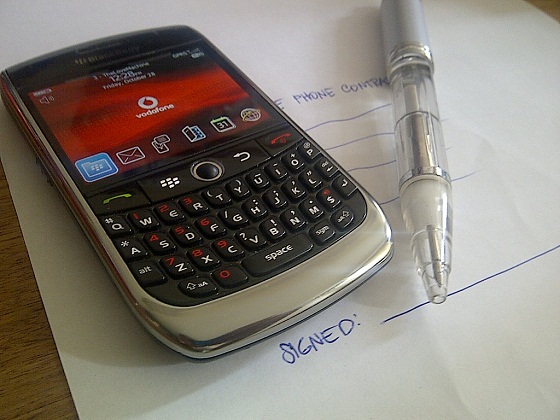 Most BlackBerry smartphone owners get theirs on a contract. We established this in a recent poll where most CrackBerry readers said they were locked in a contract. For most of my mobile phone life I have been on a contract. There have been occasions where I have gotten bored with the phone I got with my contract and buy one off contract half way through but that was before my BlackBerry days. That was also before UK networks got rid of 12 month contracts. Nowadays, we see 24 month contracts or 18 month ones in the UK and although some UK networks have brought back 12 month contracts, it's only available to existing customers and you pay a whole lot more upfront than on an 18 or 24 month contract.

You may have noticed from my UK Buyer's guide Part 1 that we love our ‘free' contracts, where we pay nothing upfront for the device. It is what most people go for when getting a contract and networks willfully oblige, as it means you pay higher per month but by doing this are you really getting the best deal? Is better to take a lower tariff and pay upfront? Or even get the device sim free (off-contract) from an authorised reseller or pay as you go?

Let's take a closer look at the cost of these contracts we're signing up to. We'll use the BlackBerry Bold 9900 as an example since all UK networks now have this BlackBerry device available. Sim free devices or pay as you go devices can be a bargain. It is certainly popular here in the UK as you can get decent, entry level handsets on a budget but high-end smartphones tend to be a little more expensive. In the UK there are a couple of websites that sell mobile phones sim free - www.expansys.com and www.clove.co.uk. Some networks will have higher end smartphones available on pay as you go while others don't. The BlackBerry Bold 9900 is available on pay as you go from O2 and Three. Let's take a look at the price breakdown.

Looking at the list above the cheapest deal would be with Three UK at a total of £459.99 (including £10 top-up). Now, let's take a look at the overall cost of your 18 or 24 month contract. The lowest monthly payment on a 24 month contract is from O2 at £16.50 per month, with an upfront payment of £199.99 for the device. The cost overall in 24 months is £595.99, already £150 more than Three's pay as you go deal. T-Mobile offers one of the most expensive monthly tariffs at £61.27, although there probably won't be many opting to choose this tariff the overall cost would £1470.48, three times more than pay as you go deals. Let's be a little more realistic and look at what most people go for. Most folks, myself included would go for the plan that would give me the phone ‘free' on average this ranges from £30 to £40 a month depending on what network you go for. Vodafone offers the Bold 9900 for free from £36 a month so over 24 months the cost to you is £864. Anyone one of the pay as you go deals looks a lot better than that amount. Is an 18-month contract any better? Well, you pay £5 more a month but it is also 6 months less in length, so looking at the same plans as we already have O2's cheapest would become £21.50 + £199.99, totalling £586.99. This plan already cheaper than going for a 24-month contract. Vodafone's plan would be £41 a month with a free device with a grand total of £738. Again, much cheaper than its 24-month equivalent.

So, by taking a look at those values, it seems going sim free/off-contract is more cost effective than going for a contract deal. Granted some may not be able to afford spending all that money in one go but over the long run you certainly save more. If you must go on a contract plan, perhaps consider going for a lower monthly payment and pay something upfront as it still works out cheaper than taking the 'free' device option. Have you had a look at your monthly contract lately? Will you start to think about paying a little more upfront? Let us know your thoughts in the comments.