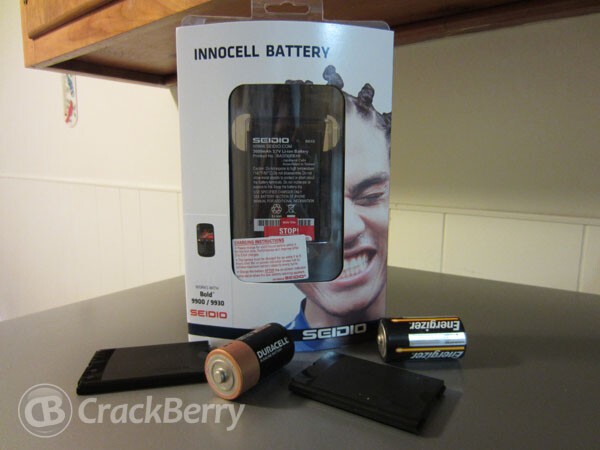 There's nothing worse than having your battery die at the most inopportune time or place especially when traveling and you forget to bring a spare charger or battery. As I work in Manhattan, signal is normally weak in the buildings and my desk happens to be in a dead zone that drains the life out of my device.

While I'm not running a lot of apps (the heavy hitters are SocialScope, QuickLaunch, BeBuzz, BeWeather, and Foursquare), I average no more than 6-7 hours. Rather than carry around a USB cable and car charger or panic when staying late for work for fear of having no BlackBerry on the way home, I picked up the Seidio Innocell 3000mAH Super Extended Life Battery. Would I be stuck searching for an outlet once again? Click on the jump to find out.

One thing I must stress, it's that the charging instructions must be followed to the letter. To help, there's a little card included in the packaging that says the following:

As your device is programmed to register the original's capacity of 1230mAh, the battery indicator doesn't accurately read this one. For instance, you could be in the red and still have more than two hours of battery life remaining. There is a slight learning curve on getting a feel for when the battery is low. In some cases, if not all, a battery pull would take me from the red back up to what it showed as around 50%.

To answer your question, yes the battery is bigger. It does add extra bulk and because of its size will not fit into most of your skin or regular cases. I used a generic holster made for my Torch 9800 and the Golla Bay Pouch. However, the Spring Clip Holster Zach reviewed can be used as well. The downside is that the sleekness of your Bold is diminished and the new soft door lacks NFC capability.

For the purposes of this review I gave myself a few ground rules. While running OS 7.1.0.523, I decided not to use Battery Saving Mode or Application Management, limited my use of WiFi at work, and did not switch off the stock OS 7 theme.

Now that we have the juice and the ground rules in place, let's get down to business. While there is no discernible time period of exactly how long it will last, it is based on your usage. The battery is more than double the size of the standard one so lasting at least 14 hours was my goal. Due to the many factors that come into play (i.e. Radio signal, Wifi, Apps, browsing, messages, etc.) your results may vary.

After using for a couple of weeks to get through the initial charging cycles and getting used to the discharge patterns, it was time to see how badass this battery really is. Over the course of two days, I tried with all my might to kill it in less than a day. Not only did I send text messages, BBM's, emails, and tweets, but I had calendar reminders snoozing every five minutes, constantly refreshed SocialScope every 15 minutes or less, and browsed the web for over 40 minutes on the train home. Apparently, it was time to up the ante.

While still doing all of the above, I played MP3s for about two hours, used WiFi for an hour in the morning and then again for two hours in the evening to listen to TuneIn Radio while paired with a Motorola Bluetooth travel speaker. I performed five battery pulls (uninstalled and installed a couple of apps), made a couple of phone calls, went through the subway and railroad tunnel and it showed ~30% juice remaining when I shut down after 17 hours (again the meter can be misleading). I turned it on the next day and went another 6 1/2 hours before it finally conked out. It's safe to say this battery exceeded my expecations by lasting approx 24 hours on this test. During other test runs, I would get between 18-24 hours even when I did try running an OS 7 custom theme. Not bad if you ask me.

The BlackBerry Bold 9900/30 is a powerful device but unlike its predecessors does not have the power to last for days. Yes this battery is big and bulky and is not aesthetically pleasing, but it's an impressive power source. Using this battery depends on what you feel is important. Would you rather have great performance and battery life if that meant living with a heavier device or do you prefer retaining the slim form factor, lightweight feel, and being able to use your cases?

I am pleased with its performance and wouldn't hesitate to make that decision. In the eight months I've owned my Bold 9900, having it last two days was never possible. Even in areas where it spent three hours searching for signal it kept going. I love knowing when I leave the house I don't have to worry about how long I'm going to last or annoying my friends and family for a charger.

If you're constantly on your device, traveling, or just want the mental relief of knowing you don't have to scramble for power, then I highly recommend this extended battery. For those looking for a case, Seidio announced that a compatible Surface Extended case is coming soon.