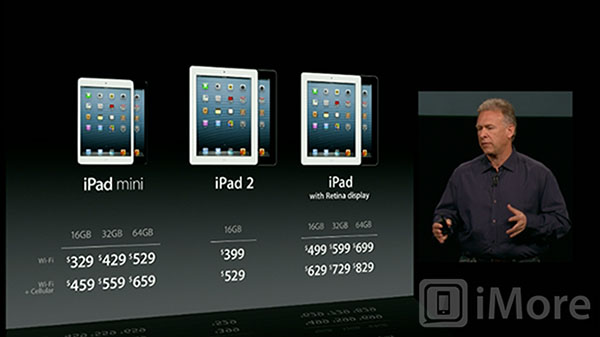 Nearly two years ago to the day, the late Steve Jobs declared 7 inch tablets DOA. What Steve didn't say then though was that they only needed to grow by point nine of an inch. At least that's Apple's take on small tablets.

Today Apple unveiled their smaller tablet strategy with the long-rumored 7.9" iPad mini. It lacks that retina screen but packs everything else from the internals of the iPad 2 and wraps it all up with a starting price of $329 and going up from there depending on connectivity and storage options.

At $329, the iPad Mini isn't exactly what you'd call cheap; especially if you consider that today you can buy a BlackBerry PlayBook for $149 and Google's Nexus 7 for $199. A lot of people were hoping and expecting Apple to go even lower with their pricing. Wall Street was too apparently, considering Apple's stock dropped $20 immediately following the pricing announcement. To add a little something else to the mix, Apple also unveiled their new iPad 4th generation which, caused a little bit of a disturbance in the force due to the fact the iPad 3 is still fresh.

All said and done, I wasn't overly impressed with the announcements from Apple in regards to the iPad mini or the iPad 4th generation and I get the feeling I'm not the only one. What do you all think of the announcements? Sound off in the comments and let us know what you're all thinking.

Check out iMore for more info