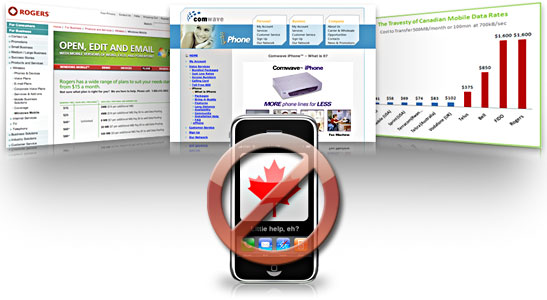 I'm sure you've all heard now of the gouging that Rogers is offering up to potential iPhone users in Canada. Their current pricing structure has sparked compaints all over the web, including an online petition, 'RuinediPhone.com' (Check it out... last I checked the petition was closing in on 50,000 signatures).

Apple has apparently informed Rogers that they will divert a 'large percentage' of their iPhone stock away from Canada, and instead deliver the phones to stores in Europe. With these phones going elsewhere, Rogers stores could have as little as 10-20 iPhones in stock for launch day. Rogers had hired additional staff to handle the iPhone launch in Canada... All of whom have now been relieved of their duties. I guess 10 - 20 phones per store doesn't equal much in terms of a big launch.

Good on Apple for taking a stand here. Rates and plans in Canada are rediculous to say the least... But lets look at the bright side here. Something good has to come of this. You would have to think with mounting pressure from the public, and even Apple, Rogers would have to fold at some point and lower their plans to comparible if not better rates than that found in the US. On top of that, we'd be sure to see a trickle-down effect from this, therefore lowering BlackBerry rates for all of us too!

Expect things to happen before the July 11th launch. If not, get ready for another 'Kevin Smash'.

[ via The iPhone Blog and BGR and Smithereens ]