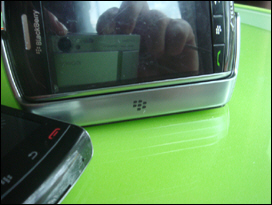 We already answered this week the question of whether the Storm II (9550/9520) weighs more or less than its predecessor. If you missed the answer to that, you can check out the overkill in part I and part II. Another Storm II question/concern that's popped up in the Storm 9550/9520 forums several times now is in regards to accessories. For all the original Storm owners out there who invested in items like the BlackBerry Storm Charging Pod, they want to know if the old accessories are going to work with new Storm or if they'll have to invest in new ones.

The charging pod/dock is one of those must-have accessories, and as you can see from the photos above it's looking like those who plan on upgrading to the new Storm will also have to upgrade their charging pod. The new Storm's shape is just a little bit different, which causes it to wedge tight within the Storm 9530/9500 charging pod. The micro-USB ports are nearly in the same place, but it just doesn't go! If you recall a few weeks back, we saw some BlackBerry 9520 accessory SKUs show up in Vodafone's inventory system, one of which was for the 9520 charging pod, further showing we can expect slightly different revisions of accessories for RIM's new touchscreen.