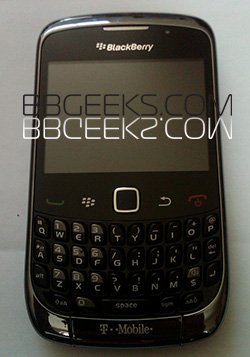 The folks over at BBGeeks have brought us all another quick look at the BlackBerry Curve 9300. All in all, not a whole lot of new information has come about for the BlackBerry Curve 9300 but, we pretty much know all there is to know about it anyways. The specs have been known for a while now and we've even got the majority of carriers that will be taking it on, ie: T-Mobile, Bell, Rogers etc.

Some rather new information to come from the article over at BBGeeks though is that according to some of their sources, there is still a chance for those of you out there that pick up the BlackBerry 9300 to get at least a taste of BlackBerry 6 with this device. According to what BBGeeks has been hearing, there is still a slight chance (70/30) we'll see the WebKit browser placed into this device. So while it'll not be a full blown version of the media-centric BlackBerry 6 we've seen of late, it will have the updated browser.

All things considered, it really doesn't make sense to put a full blown version of BlackBerry 6 on the BlackBerry Curve 9300. It was not designed for that purpose. it was designed to be a cost effective communication tool and not a mediacentric workhorse that we've come to expect from say the BlackBerry 9800. Personally, if I was concerned about device cost yet, still wanted to have a functional BlackBerry device on hand there is no reason to not pick up the BlackBerry 9300 when it arrives across carriers. All too often we forget, some folks don't need the latest and greatest. Some folks just need something that just works.