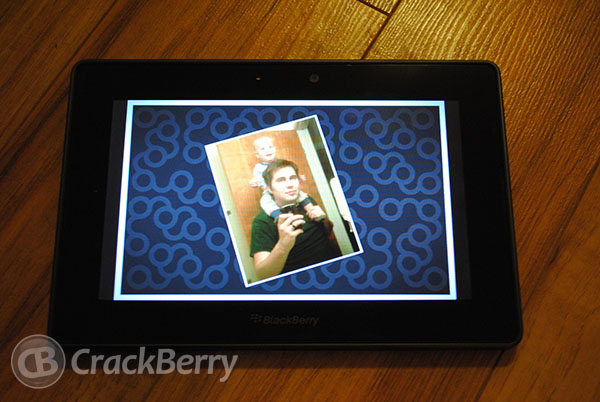 We have a pretty awesome community here at CrackBerry. From humble beginnings 5 years ago, we have grown to over 3 million members, many of whom have developed long lasting friendships and more through the site. We have a lot of members that really go above and beyond to be active, not only helping out others but contributing to conversation and helping to make our community not just something you visit when you have a problem, but somewhere you feel welcome and want to belong to. We decided it's time we start recognizing community members that stand out, so each month we'll pick someone and post about them.

Without further ado, let me introduce you to this month's pick. Not only is he a long time member of CrackBerry, he's also an app developer. You can find his latest apps in App World, including Tablet TV which is one of my personal favorite PlayBook apps. His name is Shane, known around the forums as SCrid2000, and he is CrackBerry's Member of the Month for April! Keep reading for a little Q&A with Shane.

How excited are you to be chosen as our first CrackBerry Fan of the Month?
Extraordinarily excited! More excited than my 18mo old when we give him Mountain Dew and the Spongebob Squarepants theme song comes on!

Tell us a little about yourself outside of CrackBerry

Well, I spend most of my time sitting in a little carrel (like a cubicle but smaller) in the basement of the BYU Law School reading old court cases; and before anyone asks, there's lots of people in the basement, it's not that they don't like me :D

When I'm not at school, I spend my time playing with my 18-Month old. In what little personal free time I have I enjoy longboarding, target shooting, general outdoors stuff like camping and hiking, and when it's nasty outside I like to spend my time doing general tech stuff, like installing a fourth linux distro on my laptop.

How long have you been a BlackBerry user/abuser?

I got my first BlackBerry, a Curve 8330m, in November of 09 about a week before I got married; I moved up from an old Sanyo S1, and before that I'd just had free flip phones. I got the BlackBerry mainly because I liked the candybar form factor, and I didn't want a touchscreen (the 8330m was only $25 at that point, and that helped the decision).

Why did you join CrackBerry, or what brought you to the site?

I joined CrackBerry because KaGlom wasn't available on the 8330m and I joined the site to make an impassioned plea to the members to have someone rip it from App World and post me a link (I had no clue it it could even be done at that point). Then I stuck around because I was working as a security guard at the time, which consisted of 8 hours a day sitting in a tiny shack making sure about 20,000 Kia's stayed in the lot after they were dropped off from Korea.

What was your first BlackBerry, and which has been your favorite?

As stated above, my first BlackBerry was the 8330m, and I have to admit the ideal it represents is still by far my favorite. I'm (still) on a 9650 right now (which I was actually lucky enough to win on Facebook) for financial reasons. The 8330m has been retired for almost a year, but if there was a BlackBerry with the form factor, keyboard, and build quality of the 8330, along with modern specs (say 1.5ghz dual core processor, 1024x728 touchscreen, and 8gb internal memory) I'd lust after it like nobody's business.

You are a BlackBerry app developer. What advice do you have for aspiring developers?

My advice would be to just jump in and start - that's actually my advice for learning most things, and I've got some stories (and a few small scars!) to prove it. I don't have any formal training in anything computer-ish (except a typing class I took freshman year of high school, which I only passed because the teacher didn't watch to make sure we were actually following any of the rules of typing (45wpm hunt and peck FTW!). So if I can hop on Google and figure out how to make my first simple app, anyone can.

Have any good CrackBerry stories, or how has the site affected you in a positive way?

I'm not awesome enough to have met my significant other or anything like that on CrackBerry, but CrackBerry has been beyond helpful to me in many other ways. Without it, I wouldn't have gained an interest in technology, wouldn't have helped found OpenSourceBB for spreading technical BlackBerry Tutorials, hybrids, etc., and I certainly wouldn't have started making themes and apps to help subsidize the ridiculously high tuition rates of 2012. I have met a lot of people on CrackBerry who I'm proud to call friends, some of whom I'm excited to meet in person at the upcoming BlackBerry 10 Jam.

Shane will be receiving a gift certificate to ShopCrackBerry as well as a RIMpire or Mobile Nations T-Shirt. If you want to nominate someone from the forums to be next month's Member of the Month, send an email to sitesupport(at)crackberry.com with their username and why you think they deserve the honor.