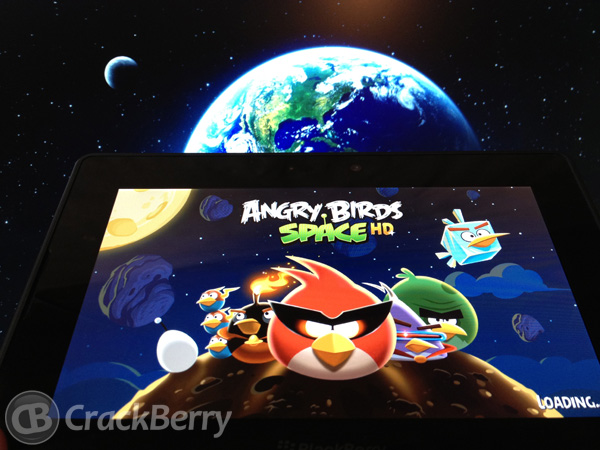 Just a month after Rovio launched Angry Birds Space for iOS and Android they are treating us to the version built for the BlackBerry PlayBook. Space is the 4th addition to the Angry Birds series, and while the other three have similar gameplay, Space is the first one to deviate from the norm and add in the concept of zero gravity. Will you defeat the pigs or will gravity get you first? Read our full review to see if Angry Birds Space is everything it's cracked up to be.

Where oh where will those birds go next? In this version of Angry Birds you will need to understand the concept of gravity and how it will affect the birds as they fly out of your slingshot and into outerspace. The new Angry Birds Space game employs realistic gravity effects, HD graphics and the typical Angry Birds soundtrack. Gameplay is what you would expect, smooth and well suited for the BlackBerry PlayBook.

While there aren't many options within Angry Birds Space, there is one key setting that is worth noting. Say you're listening to your favorite song on the PlayBook music player and maybe you don't want to listen to the game's soundtrack -- then you are in luck. On the main screen of Angry Birds Space you'll want to tap the icon on the bottom left of the screen and then tap on the speaker. Once you've done that you will be able to enjoy your music in lieu of the (sometimes annoying) Angry Birds soundtrack. The other icon you'll see there is the info option. This will just show you the games end user agreement, privacy policy and credits; nothing too captivating there.

While I'm sure most of you reading this review have had the chance to play at least one of the Angry Birds games, there may still be a few of you who haven't, and that's no problem at all. The previous games in this series use the same very simple game controls, and Angry Birds Space is no different. Before each round the sling shot auto sets with one bird ready to go. Once you've got a bird it's quite simple, just hold your finger over the bird, slide it back and the slingshot will stretch. At this point you can also adjust the angle at which the bird will launch from. Okay, so you've got the bird pulled back and aimed where you want it, now just let go! Once you let go the bird will fly across space and hopefully hit those nasty pigs. If not try again and again until you succeed. Something you'll learn as you play the game is how to use the planets' gravitational pull in your favor.

As you progress through the game levels you will be awarded with new birds to help you on your crusade to rid the world of egg stealing pigs. Make sure you follow the on-screen instructions as some of those birds have special powers and will make getting the pigs a little bit easier.

If you're a mobile gamer who cares more about the shader models, particle effects, and the anti-aliasing settings than how the game plays, then you may be disappointed. Angry Birds Space, just like the rest, have put more focus on the accuracy of the in-game physics than providing a realistic 3D environment. Don't get me wrong; the visuals are in no way bad. Rovio has created them in a way that helps tell a story -- after all what is a game other than a story that you get to interact with? Well, at least that's what I feel makes up the DNA for a good game, and Angry Birds Space accomplishes this.

Space provides the same concept of "hit pig with bird using slingshot" as the rest of the series, but the over all gameplay is quite different. I thought it was quite interesting using the gravity of each planet to whip the bird around and get it to go where you want. Within the game I felt that it was enough of a change to the Angry Birds franchise to keep me interested. One thing I didn't like about the new gameplay was that it was often hard to realize where the birds were. What I mean is that in previous Angry Birds series it was easy to tell where the slingshot was, and where the birds are as they flew through the air. But in a few levels in this installment it wasn't as clear. A small issue in what is an overall good game.

The latest game to the Angry Birds breathes some new life into the what some thought was a fading franchise. Rovio did an amazing job working with NASA to ensure that they were creating accurate space physics and gravity reproduction. The gameplay was also a nice change, though a little hard to get used to off the bat. After a few levels I had birds flying with great accuracy.

There really aren't any cons, to be honest. By now Angry Birds is a polished, rock solid game and plays very well on the BlackBerry PlayBook.

I personally thought that the Angry Birds series was getting a little stale. They did introduce Rio but it was still the same concept, except they did change it up and put birds in cages and remove the pigs, but not enough to light the fire. Now with Space there has been some new life brought into the series. The introduction of gravity and making the gamer use it to get those nasty pigs was ingenious, and will definitely add to the addictive nature that is Angry Birds. As a side note I wanted to make sure to state that after playing this on The new iPad and then on my PlayBook, I feel safe when I say playing this on the 7" screen is a much more enjoyable experience.