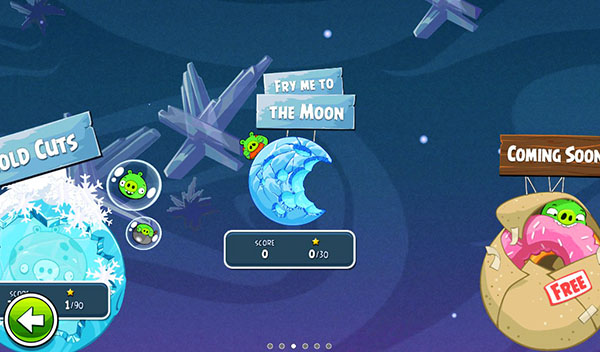 Though just released for the BlackBerry PlayBook a little over 2 weeks ago, Angry Birds Space has already received an update. Version 1.1 adds a new level called Fry Me To the Moon which will be a welcome addition for those of us that have already played through the first 2 levels. This update also includes a couple of minor changes to the layout of the menu, namely rearranging the planets and unveiling a bit more of the teaser image marked "Coming Soon".

Rumor has it that maybe the Simpsons will somehow tie into a new Angry Birds game, and we can't help but think of Homer when we see that pink frosted donut poking out of the brown wrapper in that teaser image. What do you guys think? Coincidence, or a fairly obvious hint? Let us know in the comments below, and if you don't already have Angry Birds Space on your PlayBook, you can grab it at the link below for just $2.99. Thanks to everyone that sent this in!