* Update: @RovioMobile shot us a couple of replies.. One and Two. They have no plans for Angry Birds for BlackBerry Smartphones on the BlackBerry OS right now, but the PlayBook is a definite possibility (which to me sounds like they're not working on it yet). Keep up the demands in the comments... maybe we change their minds! * 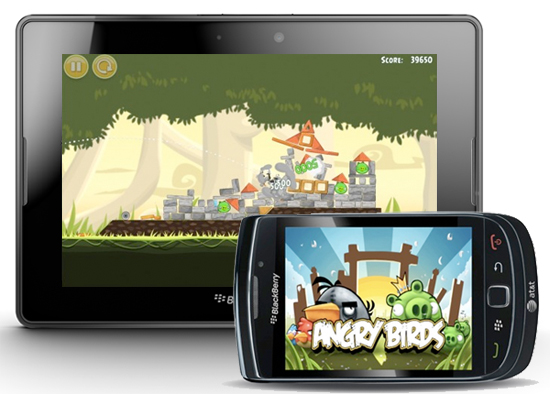 It only took me seconds to Photoshop Angry Birds onto BlackBerry.
Is it that hard to make it happen for real? Please help us Rovio! :)

An Open Letter to Rovio on behalf of BlackBerry users everywhere who would rather be playing Angry Birds right now than reading this...

I commend you on the success of your Angry Birds franchise. In app stores/marketplaces where the title is available, you have emerged in the coveted position of being that first game everybody wants to download. Heck, you're almost a tax at this point - think of the millions of minutes of wasted time that could be saved if Angry Birds just came preloaded on devices and the cost was built into the price of the phone/tablet/other gadget. People are going to buy it anyways, so think of all of the time people would save that could go into something productive, like curing... ahh, who am I kidding? It would just go into playing more Angry Birds. I guess what I'm really saying here is Congratulations! You're #1! But what about us freak'n BlackBerry users?!

Seriously, I don't think you guys understand the number of emails I get every single day from BlackBerry users wondering where they can download Angry Birds for their BlackBerry. You see, it's not just people on platforms where Angry Birds is available that are wasting time downloading something that might as well come pre-installed at this point - people are wasting tons of time trying to find Angry Birds for platforms where it doesn't even exist. I almost choked on a Cinnamon Heart today (chowing down on leftovers from Valentine's Day) when I was browsing through our site analytics and saw how many people are landing on CrackBerry because they're searching the web for Angry Birds for BlackBerry. It was a little ridiculous. And what do they ultimately find? Disappointment and heart break instead of birds and pigs.

So please Rovio, PLEASE... can you give us BlackBerry users what we want? We want Angry Birds for BlackBerry! I'd actually feel a little better if you came forward and straight out told us the current BlackBerry OS and in-market phone hardware isn't quite up to par with what you need to deliver a compelling Angry Birds experience. Then I could shift some of the blame on RIM and not you. But if that were the case, I'd at least ask you to please check out RIM's 2011 BlackBerry Smartphone Roadmap. BlackBerry 6.1 looks a lot more game friendly, and with more touchscreens and much faster processors on their next generation of hardware I'd *hope* you'd be able to make Angry Birds rock on a BlackBerry Smartphone and that the work to make that happen would already be underway. I haven't even mentioned the BlackBerry PlayBook yet. The BlackBerry PlayBook and its QNX-based BlackBerry Tablet OS is going to deliver an awesome gaming experience, and we've already seen that EA (who I believe bought your publisher, but now you're so big you don't need a publisher so I don't get what your corporate dealio is anymore) is working with RIM to put Need for Speed Undercover and Tetris onto the PlayBook. That's cool and all and I'm excited for it, but what we really, really, really, really would all love to be able to play on the PlayBook the day we buy one is Angry Birds. I know being #1 at something has its perks, but the position also comes with responsibility. Saying nothing is torture. Can't you let us know where us BlackBerry users stand are slingshotted in your Angry Birds roadmap?

I'm just one voice in this crazy BlackBerry world (albeit a slightly annoying one with a little bit of reach), so I hope beyond this letter some of our readers will step up in the comments to this post and mirror their desire for Rovio to make Angry Birds available for BlackBerry.  And in true blogger fashion, at the bottom of this letter/post I'm going to put in two links of hope. The first, an active link to signup for the CrackBerry Newsletter so we can notify all of those BlackBerry Angry Birds googling souls that we will notify them via email the moment Angry Birds for BlackBerry becomes available. The second will be a link to download Angry Birds for BlackBerry, which will remain inactive until the day Angry Birds does become available and I can link it up to App World or the CrackBerry App Store or wherever. I have faith in you Rovio that you'll do the right thing. Please, please do the right thing and give us some birds and eggs and pigs to go along with our BlackBerrys.